Earlier this week, I mentioned the possibility for one or maybe even two severe storm/tornado setups across the Plains next week. Well now, a setup is beginning to materialize across the southern Plains for Tuesday, March 8 from southern Kansas into central/eastern Oklahoma and north/northeast Texas. The details are impossible to predict so many days in advance. But what we can do is look at what information is available and make some broad statements about what may be possible.

The first thing I did was compare the GFS and European model outputs for the evening of March 8. While I’m not going to get into the European solution this time, it’s actually not necessary because it’s quite similar to the GFS solution. So that’s a good thing.

Let’s begin with the GFS surface wind and pressure forecast (below) from 00z March 4 valid Tuesday evening at 6pm, March 8. We can see a surface low over central Kansas, and a corresponding cold front over western Kansas. Further to the south and east, a dryline has mixed east to the I-35 corridor across central Oklahoma/southern Kansas, draping south-southwest into parts of north and central Texas. This dryline from southern Kansas south into north central Texas will be our primary focus for thunderstorm initiation late in the afternoon into the early evening on Tuesday.

Next, let’s take a look at the available moisture at the surface. For that, I’ve posted the surface dewpoints below. Notice upper 50s dewpoints are forecast to reach southern Kansas by 00z, but also notice lower 60s reach central/eastern Oklahoma. Further to the south in central Texas, mid 60s dewpoints are present. So based on the dewpoints alone, it seems there may be enough low level moisture to support severe storms on Tuesday anywhere from central Texas into as far north as southern Kansas. 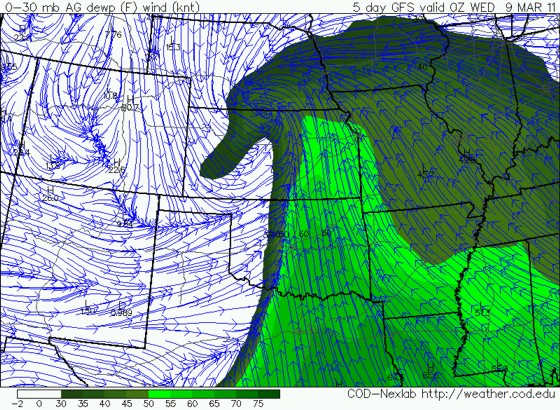 Next is the 850mb chart, and it’s very, very interesting. Notice the corridor of 45-55 knot south-southwesterly winds that covers all of eastern Kansas, Oklahoma and Texas. This alone presents a breeding ground for low-level mesocyclone formation and the possibility for tornadoes. Really anytime you have a abroad area along and ahead of a dryline — with decent available low level moisture –with 850mb winds out of the south or south-southwest at greater than 40 knots, it’s time to think tornado potential. 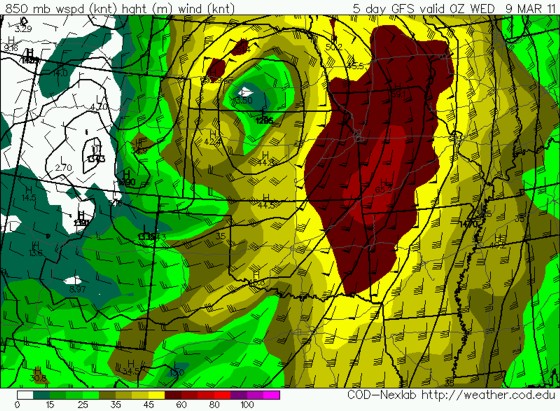 Next is the 500mb chart for the same time. Notice a 65-75 knot jet streak from the southwest is racing right over the dryline, the good low level moisture, and the strong 850mb jet. The combination of the degree of speed and directional wind shear with height (0-6 km) is ideal for fast moving supercells that will have the potential for producing tornadoes, if moisture is indeed adequate enough and the CAP isn’t too strong. 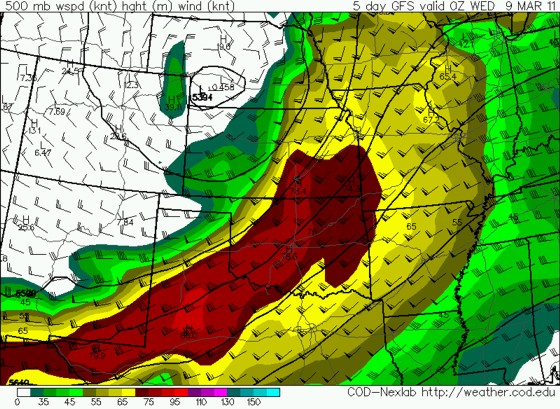 While the following image is now shown, the GFS is forecasting 700-1000 j/kg of CAPE from the Oklahoma/Kansas border southward to north Texas. Given that, the available moisture, the lift from the dryline and the trough ejecting from the west, I’d say there’s certainly the potential for low-topped supercells Tuesday afternoon/evening. Given the strong 500mb winds, storms will be moving rapidly to the northeast. And with around 50 knots at 850mb, the tornado potential will be quite good with any storms that are able to completely break the cap.

Finally, below the GFS forecast precipitation at 6pm Tuesday evening. Notice all the darker shaded (heavier) precipitation along and just ahead of the dryline in central Oklahoma up to southern Kansas. This is the model forecasting (IMO) supercells. So it appears the model believes the CAP will break sufficiently along the dryline. But the model is also forecasting precipitation all across the warm sector (well east of the dryline). This probably means the 850mb jet is so strong, it produces light rain and some elevated convection throughout the day. This may present problems, but it’s too far out to really talk more about those details. 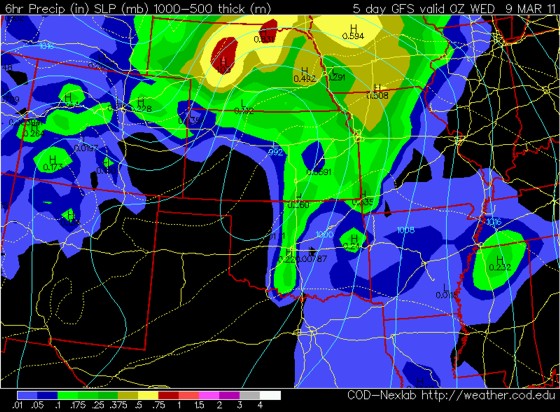 Putting the details aside, Tuesday is a day to keep an eye on for low-topped supercells and potentially some tornadoes across the southern Plains.