Another round of severe storms and potential tornadoes is possible March 7-9….

Excitement amongst the chasing community (I assume) is quite high after Sunday’s early season tornado-producing supercell. That storm raced quickly across the Oklahoma and Kansas border at 50 mph, but many chasers were still able to keep up with it’s high speed to capture images of the tornado that formed shortly before dark. But folks, I think mother nature has plans for another early season severe setup, and it seems to be focused on the early to mid part of next week.

The reason I suspect more activity began from monitoring the series of deep troughs the GFS Operational and Ensemble computer models have been forecasting to dig into the western states early next week. But my curiosity grew when I saw the European Operational model from 12z Feb 28 (the Euro tends to perform better than say the GFS model) showing a deep surface low developing on Monday morning (March 7) over the Texas panhandle.

If you look at the European Operational image below, you can see that not only is there a surface low deepening over the Texas panhandle on Monday morning, but there is another deep 500mb trough digging into the western U.S. To me, this implies there may be a two day severe storm setup across the southern plains early next week. But of course the battle with the ‘second day’ would be whether or not a cold front gets involved. Seeing the low 500mb heights over Montana and the Dakotas is not reassuring, to say the least, and suggest more cold air trying to bleed back into the plains right behind this low pressure system. 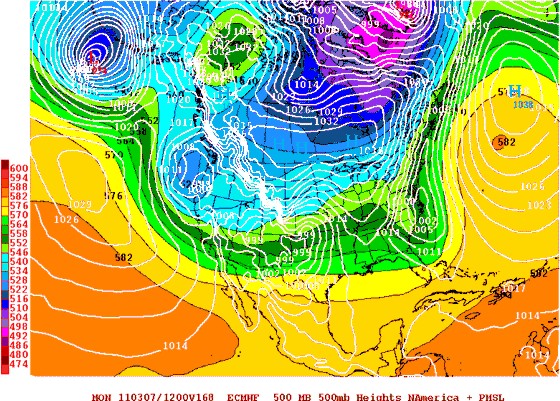 Next (below) is the European 850mb analysis for Monday morning. This shows a 40-50 knot 850mb jet out of the south over Texas, Oklahoma and Kansas. This would not only transport deep, low level moisture into the warm sector but also provide considerable wind shear that would support supercells and potentially tornadoes. We would also have to consider the moisture at the surface, but that is not available on the European model. However, if this did actually verify, it’s a good bet that sufficient low level moisture would become available considering the strength of this low level jet. 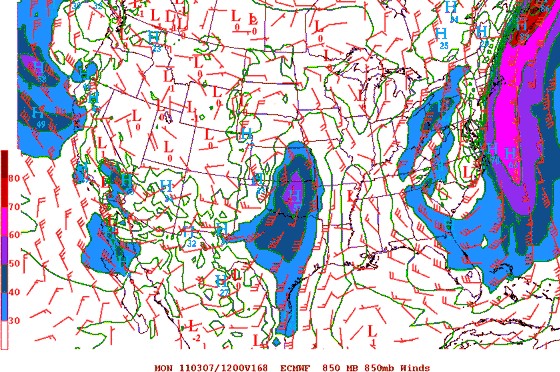 I think the computer models should be monitored over the next several days to see what exactly this series of deep upper troughs do next week. It seems probable that at least one decent severe storm or chasing setup will occur early to mid next week across the southern plains. What it will come down to is the timing of the individual shortwaves, and how quickly Gulf moisture returns to the north. But finally, the second potential setup would be contingent on how quickly arctic/cold air from Montana or the northern plains moves south toward the southern plains. All things considered, next week could get interesting!