The first major severe storm/tornado event of the season is expected tomorrow across Arkansas, W. TN and MS…

Early this morning the Storm Prediction Center issued a moderate risk (see image above) for severe storms and tornadoes across the eastern half of Arkansas into western Tennessee and Mississippi. Their forecast updated this afternoon and is virtually unchanged, with the potential for large hail, damaging winds, and one or two strong tornadoes.

The two main ingredients that will bring things together to produce severe storms will be very strong deep layer shear and strong upper air forcing. Below is the WRF 850mb chart for 00z Feb 25 (tomorrow evening at 6 p.m. CST). Notice the southeastern half of Arkansas is covered with a 50 knot jet out of the south-southwest. Given 700-500mb winds are forecast to be southwesterly to west-southwesterly between 65 and 85 knots, wind shear profiles are not only supportive of supercell thunderstorms, but violent tornadoes. 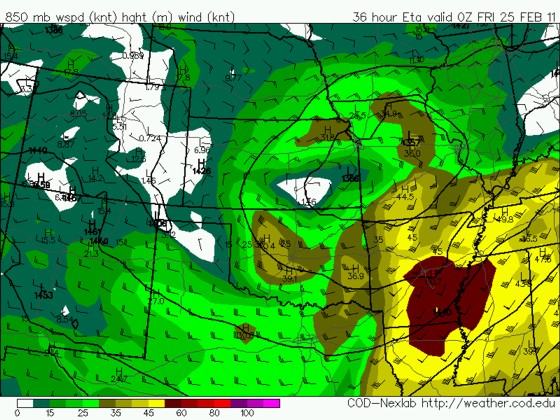 But instability may be an issue. As you can see from the WRF CAPE forecast (below), CAPE values are only expected to be generally in the 200-500 j/kg range. I wouldn’t take this verbatim right now, considering low to mid 60s dewpoints are forecast to reach the I-40 corridor by tomorrow afternoon, with cooling mid level temperatures as the upper trough rapidly approaches from the west. But, early morning convection/rain/clouds will be an issue as the warm front lifts northward throughout the day. So how much daytime heating actually occurs will likely dictate whether or not adequate instability develops to support sustained supercells and even potentially violent tornadoes. 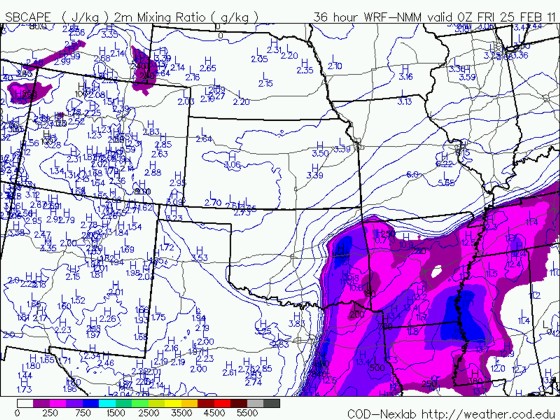 Below is the WRF precipitation forecast valid 00z Feb 25. A squall line clearly develops from northeast Texas into central Arkansas extending into southeastern Missouri. This likely develops late in the afternoon along the pre-frontal trough over western or central Arkansas as the surface low tracks northeastward. Initially, the storms within the line may have a sizable distance between them — possibly for a few hours–, especially if the line/storms develop along the pre-frontal trough and not along the cold front. But with time the squall line will eventually transition from a broken line of supercells into some sort of a MCS, especially as the cold front catches up to the line, forcing more of a classic damaging wind event.

Ahead of this squall line there will exist an extremely favorable shear environment for supercells and tornadoes. The problem once again could be meager instability. But the other issue will be the lack of any definitive surface boundary to initiate discrete storms. Though this could be a case where storms initiate from intense warm air advection within the 850mb jet anytime in the afternoon, or simply from large scale lift. In the former case it’s usually difficult for the storms to become surface based — thus their tornado potential is near zero in spite of the strong low level wind shear. In the latter case the large scale lift may not be adequate enough to develop a storm until the main vort max approaches — causing a squall line. 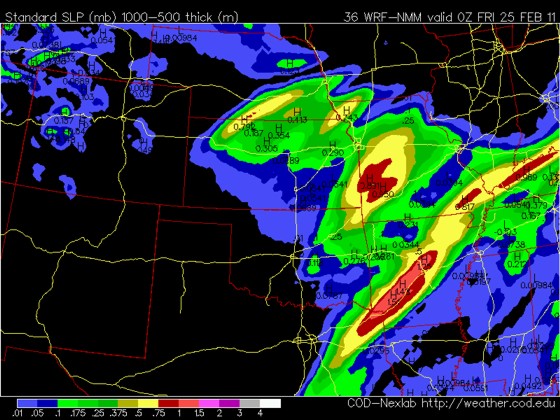 In the end it seems most likely there will be a broken squall line developing late in the afternoon across western Arkansas, expanding rapidly to the east. This squall line will initially be quite broken, with low topped supercells potentially producing tornadoes where pockets of strong enough CAPE exist. But with time, this line will become solid and thus the tornado potential will slowly decrease into the evening/overnight hours. There may be some discrete storms that develop ahead of this line over central or eastern Arkansas, and any such storm that actually becomes established within the boundary layer will have excellent tornado potential. But my thinking is the majority of the tornadoes that occur tomorrow — and I do think there will be several — will be from a supercell that occurs within a broken squall line in central or eastern Arkansas very late in the afternoon or early in the evening.

One thing to keep in mind is all the storms will be low topped. Anytime you are expecting CAPE values to peak in the 500-700 j/kg range with 500mb winds in excess of 70 mph, no storm tops will exceed 40,000 feet. By the same token, storm motion is going to be greater than 50 mph.

Below is the forecast hodograph for Pine Bluff Arkansas at 6 p.m. tomorrow evening. Notice the large amount of curvature from the surface to 700mb. This particular hodograph is very conducive to producing violent tornadoes. But I still think one big factor that may keep this setup from being a major outbreak will be the limited instability, despite the fact that wind shear will help negate that somewhat. The degree of solar radiation that occurs tomorrow across central/southern/eastern Arkansas will be a significant determining factor on whether or not there are several tornadoes — some violent– across those regions tomorrow.

This will probably be a very difficult storm chase for anyone heading out to Arkansas tomorrow. We are talking about a very fast storm motion and a rather sloppy/random storm initiation, with two main areas to watch. The first is the ‘random’ or ‘pop-up’ storms that could form anywhere in the warm sector from warm advection or large scale lift all across the eastern half of Arkansas. Playing this area is risky, but if a discrete storm does form and becomes established in the boundary layer, it could pay off. The other area to consider — and probably the better choice — is central Arkansas along the pre-frontal trough. At least this way you know approximately where storms will certainly develop. The problem here is supercells will form into a solid squall line with time. So the key would be to be on the storms as soon as they get their acts together. In both cases you are dealing with fast moving storms in a state that — unless you are in the right areas — has a horrible road network and bad chase terrain.

Good luck to chasers out there tomorrow and be safe!