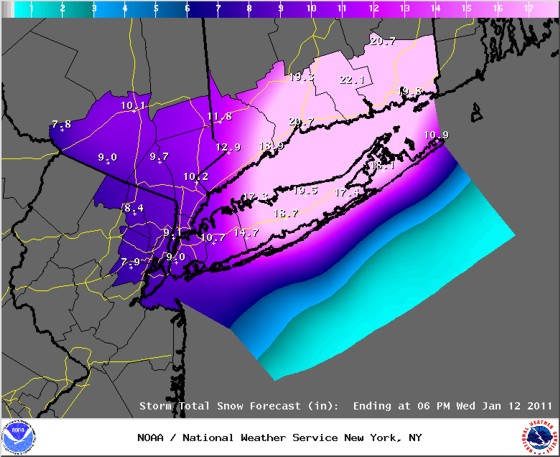 The National Weather Service office in NYC is forecasting anywhere from 8 to 20 inches of snow across the tri-state region. Specifically, Connecticut is favored to receive at least a foot of snow, with some areas approaching the 20-22 inch mark! I’m pretty excited. But at the same time, I’m exhausted. I’ve been feeling under the weather (moreso than usually for anyone that knows me) for a few days now, and sleep hasn’t been happening much for me lately. So, this post is a bit of a struggle to muster.

The NWS is leaning towards the WRF model. That is why they are forecasting 15-20 inches of snow from near Westport/Bridgeport eastward across Connecticut. But the GFS model continues to keep the heaviest snow a bit further east, and today the European model shifted the storm track slightly further east as well. So, I’m not sure I completely agree with the NWS forecast. I would begin the heavy snow band over New Haven and expand it north and east from there. Areas to the west will be in the 12-15 inch range, while areas east of New Haven will be in the 15-20 inch range.

Either way, another big snowfall for Connecticut. 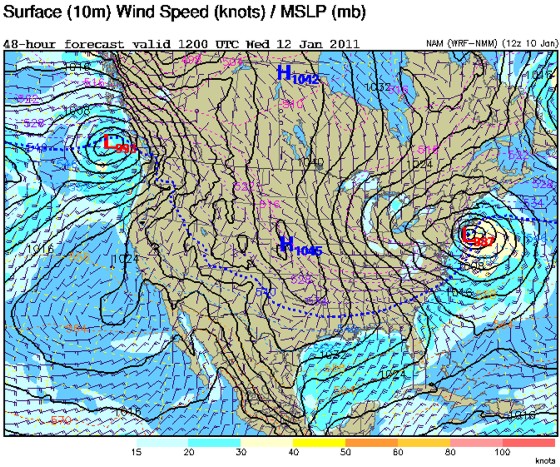 This winter has been rough as far as heavy snow is concerned from the tri-state region surrounding NYC up to much of New England. Last year it was the Mid Atlantic states, namely D.C., that seemed to get hit again and again with heavy snowfall. But every winter is different, and it seems mother nature has targeted the repeat snow events further north this year. So even though only a couple weeks have passed since the blizzard paralyzed the Northeast the day after Christmas, another Nor’Easter is poised to hammer some of the same areas once again Tuesday night into Wednesday (Jan 11/12).

The image shown is the WRF model, initialized 12z January 10, and is valid Wednesday morning, January 12. It show an intense low pressure system a few miles southeast of Long Island, lifting towards the north-northeast. This track will bring 12-15 inches of snow to areas closest to the coast anywhere from northern New Jersey through NYC, southern and western Connecticut, stretching up the I-95 corridor into southern Maine. The further west and northwest you go, the lesser the snowfall accumulations will be. But still, a large portion of New England will receive 6-10 inches of snow from this Nor’Easter.

An interesting thing to point out is the incredible amount of lift and dynamics associated with this system. With regard to that, the WRF model has been showing a period of convective snow, or thunder snow, along the CT coast and near Long Island early Wednesday morning. These are the areas I would expected to likely see 15 inches of snow, with isolated pockets closer to 20 inches!

One thing to watch is if the next couple GFS runs shift the low pressure track slightly further west (closer to the WRF/Euro type solution), or if it stays on course. Because if the WRF/Euro are a bit too far west, then the 12-15 inch snow band will be confined quite close to the coast. But right now it appears that snow band will extend many miles inland indeed.