The setup is looking a little more promising. The WRF model now shows a well defined clear slot moving through the Texas panhandle and expanding through western Oklahoma in the afternoon. But the CAP will be somewhat limited, and upper forcing will be present throughout the day as a strong trough ejects through the southern Plains. As a result, severe storms will likely fire along the dryline across the Texas panhandle very early in the afternoon. Even in wake of the morning convection, enough instability should develop to support sustained supercells. But it will be interesting to see what kind of storm coverage occurs given the weak CAP. At any rate, shear will support a decent tornado threat. This could end up being a pretty good chase day if the CAP can hold off the afternoon dryline convection long enough Friday afternoon.

The WRF and GFS models eject a strong shortwave into the southern Plains on Friday. The deep moisture already in place across south Texas (mentioned in a previous post) will advect north into Oklahoma by midday Friday. The combination of quality low level moisture and deep layer shear ahead of a dryline will support supercell development along with potentially a tornado threat across western Oklahoma and western north Texas on Friday, should adequate instability develop. 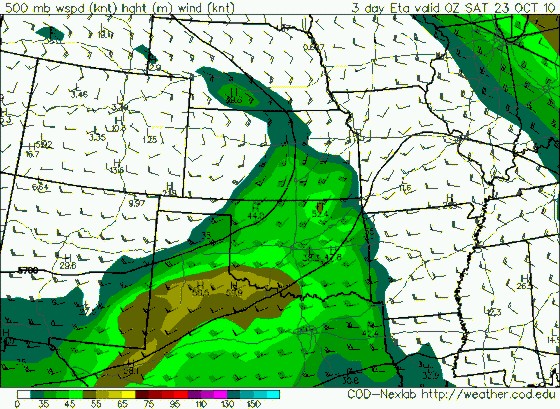 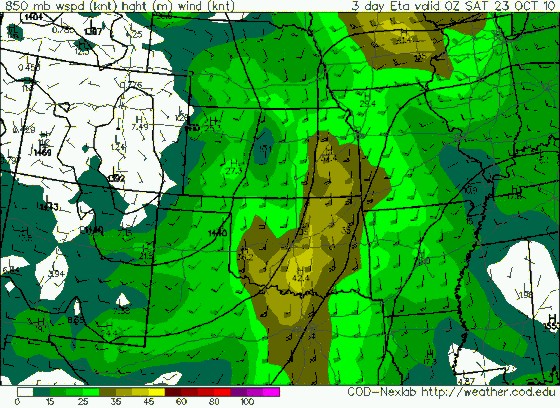 The above images show the WRF model’s 500mb and 850mb charts, respectively. The left exit region of the 500mb jet (southwesterly flow around 45 knots) will move into western Oklahoma over a 30 knot 850mb jet out of the south. This will contribute to substantial wind shear, easily supportive of supercells. At the surface, a dryline is expected to mix rapidly east during the day from the Texas cap rock to the Texas/Oklahoma border or into parts of western Oklahoma.

The issue will be the convection that occurs early in the day through midday across western north Texas and western Oklahoma. The WRF model suggests this convection will clear out in the afternoon and allow new convection to fire late in the afternoon or early evening along the dryline over the eastern Texas panhandle and move into western Oklahoma. But, it’s not clear if there will be enough time for adequate destabilization to occur to support sustained supercells and potential tornadoes. Certainly this is a setup to watch closely if you were hoping to see an October tornado!