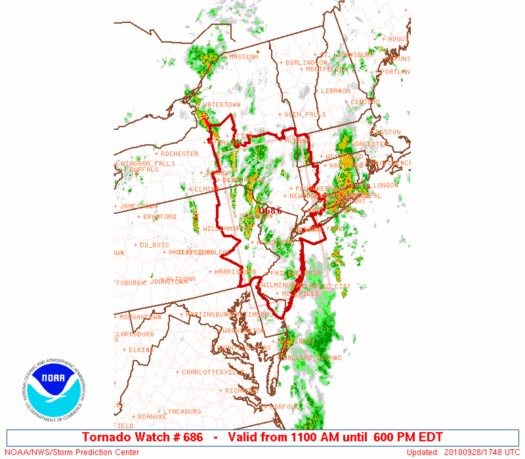 Tornado Watch for parts of the Northeast on September 28

A tornado watch was issued this morning over parts of the Northeast. There is a very moist environment in place with strong speed shear in the lower levels of the atmosphere. There is strong low level shear present thanks to a 50 knot 850mb jet from the south-southwest above southerly to southeasterly surface winds. But, the big inhibiting factor for tornadoes is the lack of instability. Much of that has to do with the cloudy skies, but also from the warm temperatures aloft.

Showers and some thunderstorms have been developing this morning, but instability has been too weak. If a thunderstorm can find a pocket of decent instability, the strong low level shear does indeed offer a shot at a brief tornado forming this afternoon.

This setup is similar to those that occur in central and southeast Texas every year in February and March. Only this setup has weaker shear and even less instability than what you’d find in Texas! Plus, the terrain in Texas allows a chaser a chance at seeing the tornado before it races past them moving north at 40 to 50 mph. Up here it’s just not the same.

After watching all those GFS model forecasts for two weeks showing a hurricane developing over the western Caribbean and tracking anywhere from Mexico to the Gulf of Mexico to Florida, Tropical Depression Sixteen has finally formed. Granted, last week Tropical Storm Matthew developed over the central Caribbean and moved into Central America. There was some debate whether or not Matthew would be the system to head to Florida this week. Well, Matthew dissipated over southern Mexico and now we have a new system heading to Florida. So go figure.

Thanks to strong wind shear ahead of a cold front that is moving through the Gulf of Mexico, Tropical Depression Sixteen likely will not reach beyond tropical storm strength before making landfall over south Florida Wednesday. But, it does look like the storm will bring heavy rains to the Mid Atlantic at the end of the week as the system becomes absorbed by a trough over the eastern U.S.