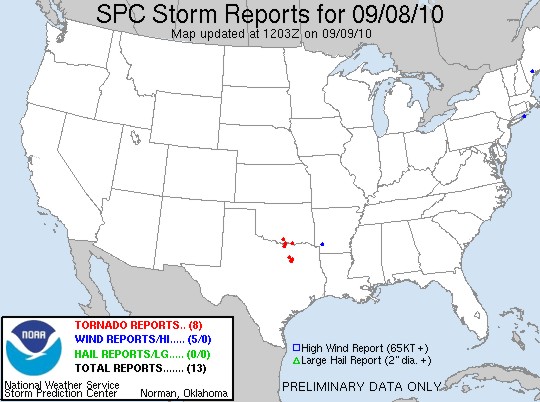 Tornado reports from the SPC for September 8, 2010

Several tornadoes were reported on Wednesday afternoon and evening across north Texas and southern Oklahoma. Homes were damaged and one person was reported injured. The remnants of Tropical Storm Hermine are to blame.

Shortly after Tropical Storm Hermine made landfall early Tuesday morning, the tropical circulation continued north-northwestward and dumped tons of rain all over south, central and southeast Texas on Tuesday. A tornado watch had been issued Tuesday morning and midday for areas in Texas. But there was just too much tropical moisture and no breaks in the rain and clouds for daytime heating. As a result, very limited instability developed and only a couple weak tornadoes were report in Texas on Tuesday.

But Wednesday was different. The remnants of Hermine had made their way to north Texas, so the connection to deep, tropical moisture wasn’t as strong. A dry slot developed from the west and worked it’s way to central and north Texas by the afternoon. This helped to clear the Dallas area from expansive clouds and rain during the afternoon. The result was instability (CAPE) that was adequate enough to support vigorous thunderstorm updrafts. The low and mid level vertical wind shear was very strong thanks to Hermine’s remnant circulation. All these conditions came together and caused supercells to develop from the Dallas area to southern Oklahoma. Some of these supercells produced tornadoes and caused damage.

Tornadoes are not as common in Texas and Oklahoma in September as they are in the spring months. On top of that, a tropical system was moving through and not everyone associates a tropical storm with tornadoes. So, many people in the Dallas area were a bit surprised when they saw live video of tornadoes in Dallas on their local evening news.