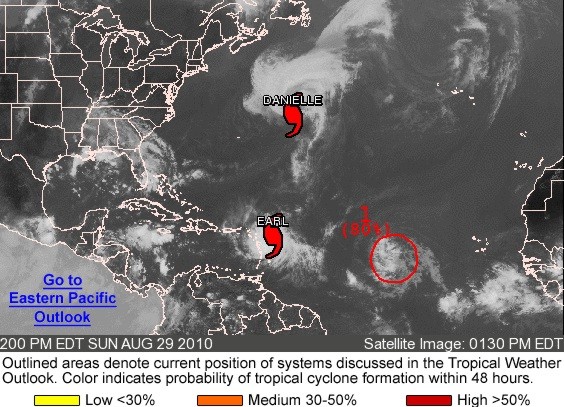 This has been an interesting hurricane season to watch over the past week. I’ve mentioned plenty of times the abundance of dry air covering much of the Atlantic for quite some time. This has kept tropical storms and hurricanes from showing any significant strengthening for several days into their development. But, as seen from Hurricane Danielle after several days of organizing and some ups and downs in her life cycle, she reached major hurricane status in spite of the dry air. The warm waters and pockets of weak wind shear allowed it to happen – eventually.

Now we have Hurricane Earl who is quickly approaching the northern Leeward Islands. Dry air has been a major issue with him (what a surprise), but his center is becoming much better organized, and upper level outlfow is improving by the hour. This is pretty similar to what Danielle went through before reaching major hurricane status. Earl is moving over some very warm waters, and has more warm water ahead of him. Wind shear is also expected to relax over the next coule days. So, it’s no coincidence that he too is forecast to become a major hurricane over the next day or so as he turns northwest in response to a weakness in the Atlantic ridge.

Forecast advisory for Hurricane Earl from the NHC August 29

Earl will be moving northward by mid week (Sept 1) over the western Atlantic, not far from the Mid Atlantic coast. He will be picking up forward speed and maintaining major hurricane status as he moves over the warm waters of the Gulf stream. Meanwhile, a trough will be approaching the upper Midwest. By Friday, this trough will be moving through the Great Lakes, and will begin to cause Earl to turn towards the northeast. The questions that need answers are how 1)how close to the coast of New England will Earl have reached, and 2) how quickly will that Great Lakes trough eject eastward? The answers to those questions will determine whether or not Hurricane Earl hits Cape Cod or brushes by just to the east. More than likely it’ll be a near miss. But you never know, and it’s too early to be sure right now.

There’s another tropical wave that is located over the central Atlantic. I will become a tropical depression or tropical storm within the next day or two. When it does, it will be named Fiona. But, it too is struggling with dry air (big surprise, huh?) and has been having major problems developing a closed low level circulation. Computer models bring the future Fiona to about where Earl is now (near or just north of the northern Leeward Islands) by Wednesday (Sept 1).

Then, things get really interesting. Does Fiona turn northwest in response to the weakness in the Atlantic ridge caused by the Great Lakes trough and Earl? Or, does she miss the connection and continue westward toward Cuba and South Florida? Most computer models have Fiona making the connection to the northwest and reaching near the Bahamas by Sept 5. By then, it’s a question of how quickly a new ridge develops over the eastern U.S. The slower the ridge develops the better the chance Fiona hits central Florida to North Carolina. The faster it develops the better the chance Fiona stays further south and hits South Florida or enters the Gulf of Mexico. 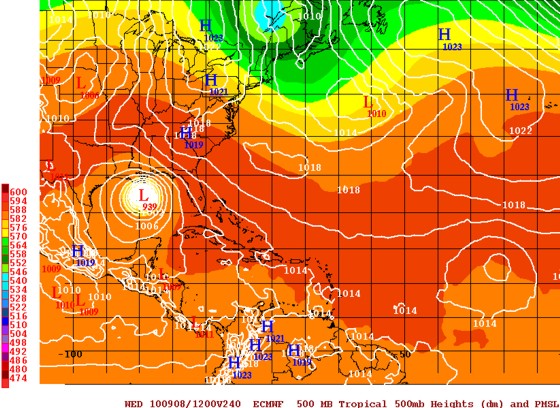 There are a lot of options on the table here with the future Hurricane Fiona. But with the way the pattern is setting up, the warm water temperatures and the weakening wind shear, it looks increasing likely that we are going to have our first major hurricane landfall in the U.S. around Labor Day weekend, or shortly after, anywhere from Florida to the Carolinas. The Gulf coast isn’t out of the woods, either.