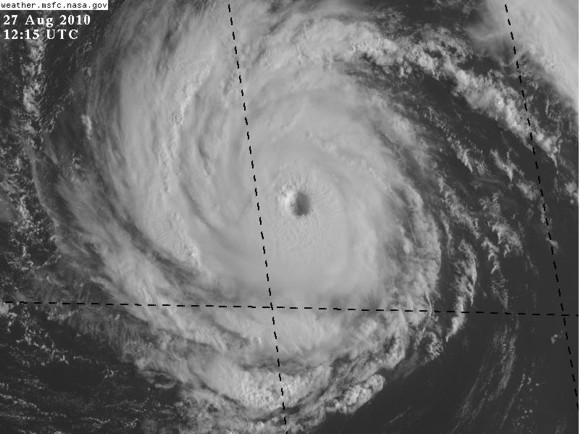 I don’t really have a whole lot to say except wow, what a beast! Hurricane Danielle really took off over the last 24 hours, becoming a category 4 hurricane with maximum sustained winds of 135 mph. There is still plenty of dry air surrounding the outer bands of Danielle, but it finally came to the point where it just doesn’t matter. Her inner core is extremely organized, and the intense outflow is keeping the dry air from impacting her well defined eye. What a beast.

Tropical Storm Earl continues to fight dry air to his west, and hasn’t strengthened since yesterday. Computer models curve him northwest and then north over the western Atlantic next week. But some bring him uncomfortably close to Cape Cod. That could be an interesting situation if models trend further west. But, a trough lifting out of the Great Lakes late next week will help to keep Earl from actually hitting the Cape.

The next system near Africa should develop into a tropical storm over the next few days. Some models bring it (next name is Fiona) close to the Mid Atlantic coast in 12 days or so as a tropical storm or hurricane. I know that’s a long way away, and a lot of things can change between now and then. But, it will be something to watch. 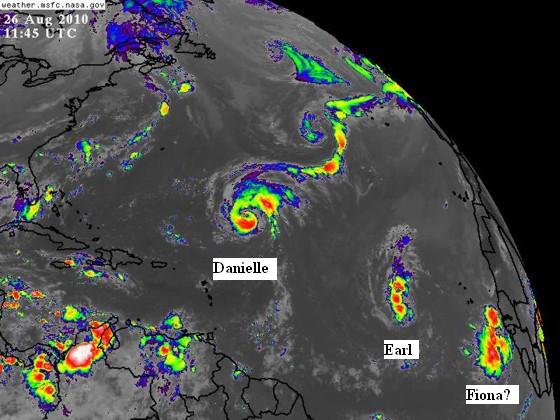 Danielle has been fighting an uphill battle for days, absorbing the abundance of dry air that surrounds the Atlantic waters. This dry air has been one of the main reasons for the slow start to the season, along with wind shear that hasn’t relaxed as quickly as forecast. But overnight and throughout the course of this morning, Danielle’s upper level outflow has blossomed. It’s this outflow that appears to be keeping the dry air well away from the storm’s center, allowing for intensification to occur. An eye is now visible on satellite imagery. As long as this trend continues, Danielle will become the first major hurricane of the season, if she hasn’t already. 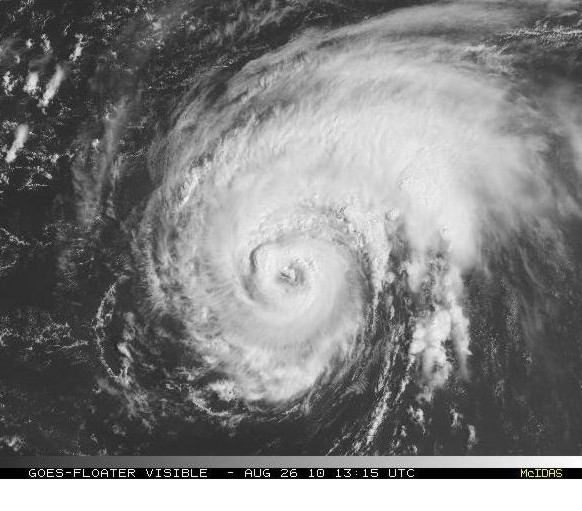 August 26 morning visible satellite image of Hurricane Danielle. Notice the eye at the center, and the banding structure. This is a visual sign of good outlfow.

We have now had a total of five named storms so far this hurricane season, two of which have become hurricanes. This catches the hurricane season up to what would normally occur during a regular season. But, assuming Hurricane Danielle strengthens a little more, she will become the first major (category 3) hurricane of the 2010 Atlantic hurricane season. We don’t typically see the first major hurricane until the first week in September. Let’s not forget that Tropical Storm Earl is forecast to become a hurricane by this weekend. So, if Danielle can reach category 3 status and Earl becomes a hurricane, we will finally be on par with an active season.

But, we still have a long way to go to meet expectations set by forecasters before the season started. This active trend needs to continue in the near term, and things will have to be kicked up another notch in the longer term, for any of the seasonal hurricane forecasts calling for 18 named storms to stand a chance at verifying. At least this is a step in the right direction.