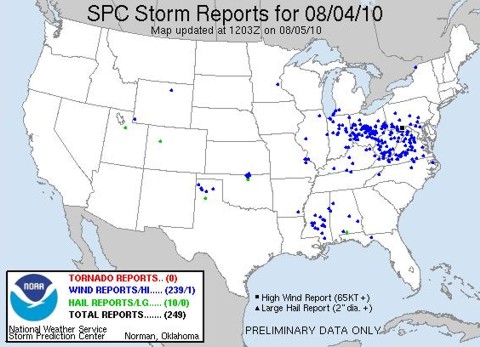 According to the AP, high winds associated with a line of severe thunderstorms knocked over barns being renovated Wednesday at Ohio’s largest egg farm near Hartford, killing two workers. Based on the SPC storm reports page, this occurred around 1 p.m.

A couple hours earlier (according to foxtoledo.com), the same line of storms caused a cinder block wall to blow over near Edgerton, Ohio, falling onto and killing an eighteen year old male construction worker. According to the coroner, the death was caused by injuries from blunt-force trauma. Hours later in Cumberland, Ohio, high winds from thunderstorms caused a tree to fall onto a woman, killing her.

When I think about severe weather related deaths, I usually think about tornadoes, flooding, even oppressive heat. But, fatalities from strong straight line winds are usually not on the list. Yesterday, a line a severe storms producing damaging straight line winds moving through Indiana and Ohio is responsible for all of this. The storms moved quickly east and evolved into a long-lived, damaging squall line known as a derecho. This derecho moved all the way to Pennsylvania, Maryland and Virginia, causing over 200 damaging winds reports.

Well, at least this high wind event in of itself isn’t surprising. During the summer months, the Midwest is notorious for having damaging wind events which sometimes extend into parts of the Mid Atlantic. It’s the combination of quality low level moisture, hot temperatures and upper level disturbances moving over the top of an intense heat ridge that triggers these events.