Tropical Storm Bonnie is hanging on to tropical storm status by a thread as she approaches south Florida this morning.  Wind shear continues to takes it’s toll on her, and maximum sustained winds are a generous 40 mph.  Bonnie is moving very quickly to the west-northwest at nearly 20 mph.  I know that doesn’t sound fast, but most tropical systems move in the 8-13 mph range, if not slower, not close to 20 mph!  Her fast motion is about the only thing that will help her not degenerate back to tropical depression status as she passes over or just south of south Florida.

At this point it’s safe to say that any impacts that Bonnie will have on the oil spill will be minimal.  In fact, I’m beginning to question if Bonnie will even be a tropical storm when she passes over the oil in the north central Gulf this weekend.  Wind shear just isn’t going to weaken all that much.  Also, Bonnie is moving so fast she won’t have as much time over the warm Gulf waters as previously thought.  The only real problems are already known.  That would be the delay in the cleanup efforts along parts of the Gulf coast, and BP having to delay efforts to dig a relief well.

Tropical Depression Three becomes Tropical Storm Bonnie:  How will this impact the oil spill in the Gulf?……

After the 5 p.m. advisory, the National Hurricane Center issued an update to upgrade the depression to Tropical Storm Bonnie.  The storm is still expected to track across the central Gulf of Mexico.  Unfortunately, it’s going to come dangerously close to passing right over ground zero of the oil spill this weekend.

It is my hope that this storm doesn’t spread any of the oil or airborne toxins to the Texas/Louisiana coast, or even inland.  That brings up a really good question.  Has anyone done a study on how quickly the airborne toxins associated with oil disperse into the air over time and distance?  It would be awesome if someone came up with a method to determine how these toxins may actually spread into the air over time with various tropical storm and hurricane strengths and sizes.  Surely whatever airborne chemicals that are advected from the oil spill over the Gulf become diluted in the atmosphere over time.  I’m sure high humidity levels, like what is present over the Gulf of Mexico, would also make a difference.  But, I don’t know what it would really do.  Hence the need for a study.

For now anyways, I hope this storm doesn’t cause too many problems given it’s lack of intensity.  Though I still worry what kinds of toxins could possibly be delivered in the form of rain into the Texas and Louisiana coast from Tropical Storm Bonnie.  I could very well be possible that the rain is a non issue, and the real questions come from the air alone.  But once again, a study on the impacts of tropical systems over a oil spill would be awesome to see right now.

The National Hurricane Center declared the disturbance in the southeastern Bahamas Tropical Depression Three this morning at 11 a.m. EDT.  All week, the tropical wave/disturbance has been battling wind shear.  But today, it finally managed to develop a closed low level circulation, which is the main criteria needed to become a depression.

Fortunately for the Gulf of Mexico, wind shear isn’t going to relax enough over the weekend to allow this system to strengthen to anything more than a tropical storm.  But still, it forces cleanup efforts across parts of the Gulf coast to shut down for a few days, and that’s bad news.  Although, it’s not out of the realm of possibilities that Tropical Depression Three does become a minimal hurricane for a brief time over the Gulf.  But, given wind shear and African dust currently over the Gulf, that scenario seems highly unlikely. 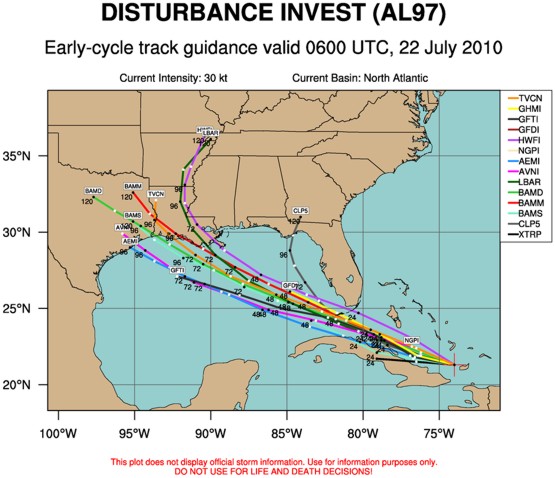 The graphic above shows the tropical models for TD#3.  Boy, they sure made a big shift to the west since yesterday!  It makes sense, too, considering the strength of the ridge global models indicate over the southern U.S./Gulf this weekend.  Plus, the global models are the ones which have shown a track across parts of the Gulf, especially the central Gulf, all along.  They normally have a better handle on things before a storm develops. 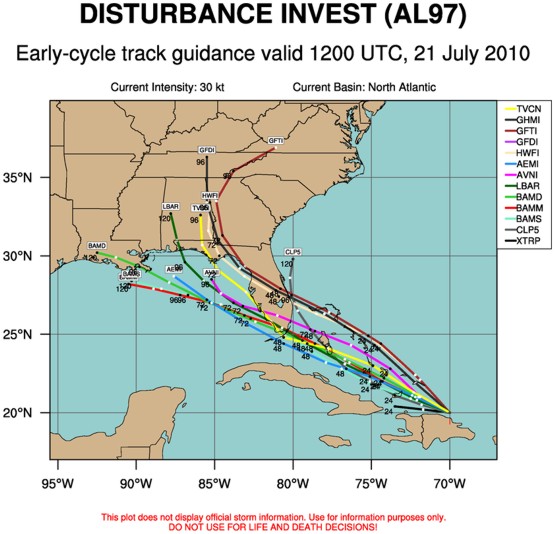 The disturbance we are monitoring is located just north of Hispaniola, approaching the far southeastern Bahamas.  Wind shear remains the main inhibiting factor for development.  But, computer models suggest the shear will relax enough over the next day or two to allow for tropical development as the system gets closer to Florida.  Although, there probably isn’t enough time for this system to become much more than a weak tropical storm before it impacts Florida on Friday and Saturday, especially if wind shear takes longer than forecast to weaken.

Since yesterday, more tropical models track this system into the Gulf of Mexico.  Yesterday, I mentioned that the global models usually have a better handle on tropical systems before they actually develop.  Some of them continue to show a track into the Gulf, even the central Gulf.  So, we’ll have to see if this westward shift we are seeing in some of the tropical models is a meaningful change, or if it’s just a temporary shift in model guidance.

In the meantime, a storm has to actually develop, or talking about model track forecasts is a moot point!

A vigorous tropical wave stretching from Hispaniola to Puerto Rico has the National Hurricane Center’s attention. 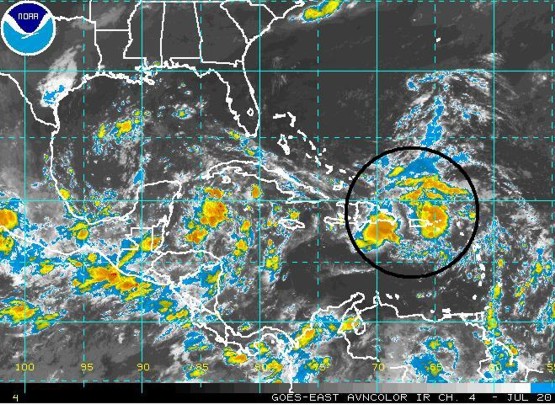 A strong tropical wave is producing a large area of showers and thunderstorms from the northeastern Caribbean to north of the islands.  According to the National Hurricane Center, environmental conditions are only marginally favorable for development, but may become more favorable over the next couple days. 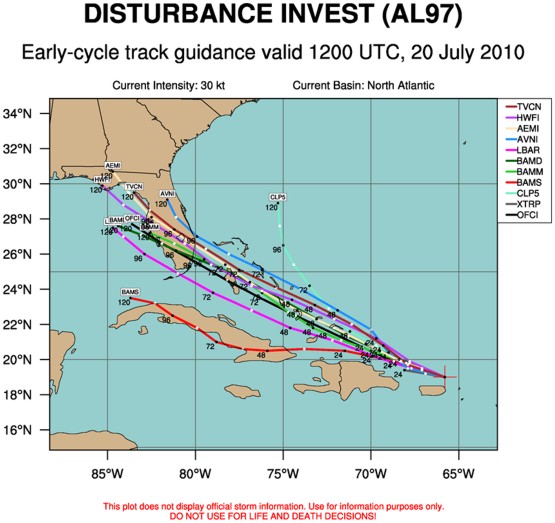 One Response to “Watching the Tropics”