Tornadoes and damaging winds verified across the upper Midwest, but no signs of a violent tornado… 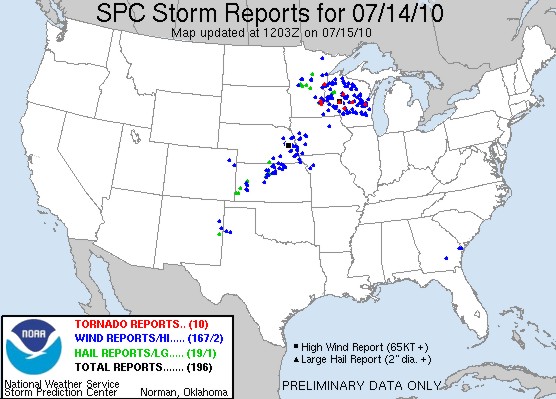 There were 10 tornado reports from Minnesota to Wisconsin yesterday.  Although, some of those are probably duplicates.  At any rate, a few tornadoes occurred as expected.  But, I am a little surprised there are not any reports that would suggest a violent tornado occurred.  Such as significant damage or maybe even a report of a large tornado from a storm chaser.

I wasn’t able to watch the event unfold yesterday.  But from looking at the radar archive from UCAR, many storms formed into line segments or a squall line rather quickly across eastern MN.  The supercells that formed ahead of the line were responsible for producing the tornadoes, in addition to the initial supercells that developed before the squall line developed.  This falls mostly in line with what I thought might happen.  But, I really did expect more time for discrete supercells and tornadoes before the squall line and MCS activity really took shape.

In the end though, damaging straight line winds was the main impact from this event.  Actually, the highest concentration of damaging winds occurred inside the SPC’s 60% damaging wind area.   Not only that, numerous reports of winds in the 65-75 mph range are shown on the storm reports page.  These reports included information like “large trees down”, or “numerous trees down”, or “trailer flipped over”.  Basically, the high wind forecast verified with flying colors.  The tornado forecast verified, but not as well.

A pretty classic summertime tornado and severe thunderstorm setup is unfolding today across the upper Midwest.  Namely eastern Minnesota, northeastern Iowa and western Wisconsin.  As a result, the Storm Prediction Center (SPC) has issued a moderate risk for severe thunderstorms.

An upper level disturbance is moving through the region, over the top of a large ridge of high pressure.  This ridge will be responsible for surface temperatures soaring well into the 90s today across the region.  But later this afternoon into this evening, thunderstorms are expected to develop along a cool front over central Minnesota and Iowa.  The combination of extreme instability (with CAPE around 4000-5000 j/kg or greater) and strong wind shear will promote the development of supercell thunderstorms, capable of producing tornadoes.  Some of these tornadoes could be violent.

The tornado threat is highlighted in the second graphic below from the Storm Prediction Center, with a 15% hatched area for tornadoes.  But, what’s most interesting to me about this forecast is the 3rd graphic, indicating the probability for damaging winds.  Notice the 60% area for damaging winds over eastern Minnesota and Wisconsin.  Now, I’d have to do a bit of digging, but I can’t recall a time I’ve ever seen a 60% chance for any type of severe weather on a day 1 convective outlook, let a lone one for damaging winds.  In reading their discussion, the SPC seems to be expecting a high end damaging wind event tonight in the 60% area, as they expect supercells to organized into a derecho.  A derecho is basically a violent, large scale, long lived squall line or MCS.  These produce very strong straight line winds over a large region.

It would be very interesting if both violent tornadoes and a derecho occur from this event.  The tornado threat is one you would expect from this setup.  CAPE values forecast by the RUC model are literally off the charts, with a large area of 8000 j/kg and some areas in the 10,000 j/kg range!  This model is notorious for overdoing CAPE forecasts.  However, with dewpoints in the upper 70s to lower 80s and surface temperatures well into the 90s, CAPE values in excess of 5,000 j/kg are not out of the question.  As for the derecho occurrence, the strong 700mb winds and the very dry air at that level would certainly promote such an event. 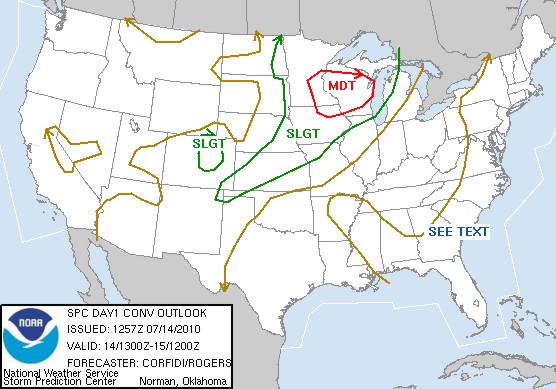 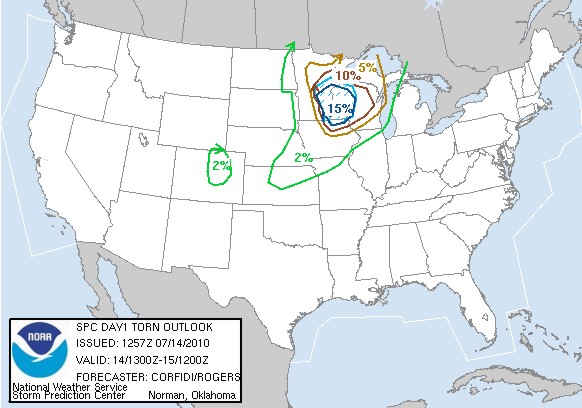 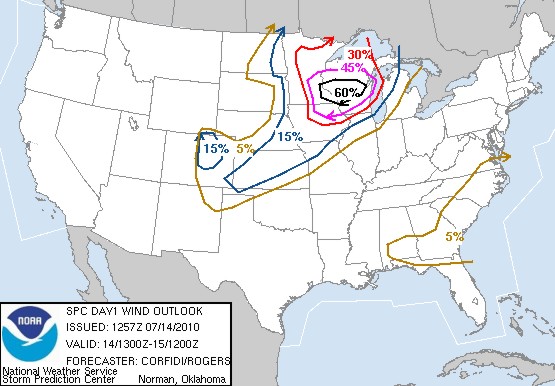