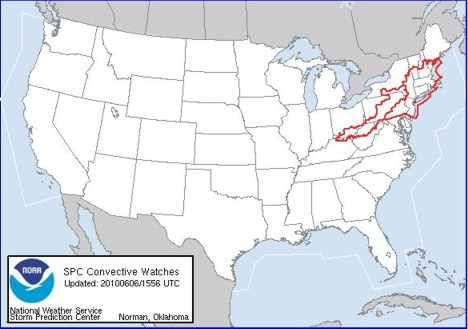 Supercells are expected to develop over the next few hours from Philadelphia up through southern New England and eventually move through central and northern New England by this evening.  The combination of instability and wind shear present has prompted the SPC to issue tornadoes watches that stretch across the Northeastern states.  This is a rare event, but even more so considering there were tornado watches over these same areas yesterday.  The difference now is the low level wind shear is moderate to highly supportive of tornadoes within any discrete supercell.  Storms will be racing northeast faster than 50 mph.  So, if chasing wasn’t  already nearly impossible considering the terrain and roads up here, the fast storm motion pretty much seals the deal. 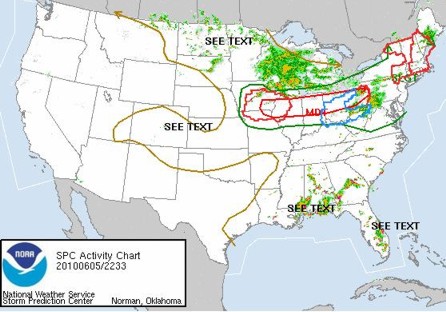 It’s not often there are two tornado watches issued to cover most of New England.  These watches were active for most of the afternoon today (Saturday, June 5) and can be seen in the image above.  IMO, conditions were only marginally favorable for tornadoes at best.  But, certainly favorable for multicell storms and some supercells, supporting large hail and damaging winds.

The setup with much more potential across the Northeast is coming tomorrow (Sunday, June 6).  For that setup, the SPC has issued a hatched area for enhanced severe potential across southern New England, with a 30% risk  for any form of severe weather.  Below is an image showing there outlook. I couldn’t agree more with their forecast.

From what I’m seeing, a strong upper level through will eject through New England on Sunday.  Deep layer wind shear will be supportive of supercells.  Given the expected storm motion of around 55 mph to the east/northeast, and the strong 850mb winds, tornadoes will be possible.  The one issue will be the high degree of forcing from the intense upper level trough.  This could cause storms that fire around noon, or in the very early afternoon, to quickly develop into a MCS (Mesoscale Convective System), or an intense squall line.  Either way, the development into a t-storm complex would significantly reduce the tornado potential.  However, the initial storms that form in southeastern NY into western CT will likely be supercells.  For the hour or two when these storms are supercells, they should pose a moderate to high tornado threat given the low level shear present, along with the incredible amount of low level moisture available. 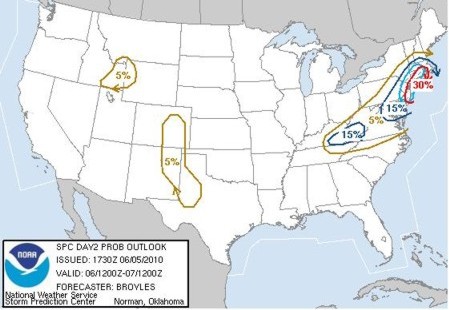