What a day!  MaryLeigh, Sarah and Jesse Duncan and I witnessed eight tornadoes across northwestern Oklahoma and southern Kansas on Monday, May 10 2010.  It’s late and I don’t have time to post video.  But we have some great shots west of Wakita, Oklahoma (first two pictures).  The last picture is a video capture of a violent wedge tornado that developed less than one half mile to our east in Arkansas City, KS.  Storms were moving extremely fast (around 55 mph), so keeping up with them was nearly impossible.  But we did a great job and saw saw incredible tornadoes and supercells.

The pictures below were taken by Jesse Duncan.  I shot the video.  MaryLeigh also has some great pictures.  But truly an awesome day.  Could have more tornadoes tomorrow and Wednesday!!! 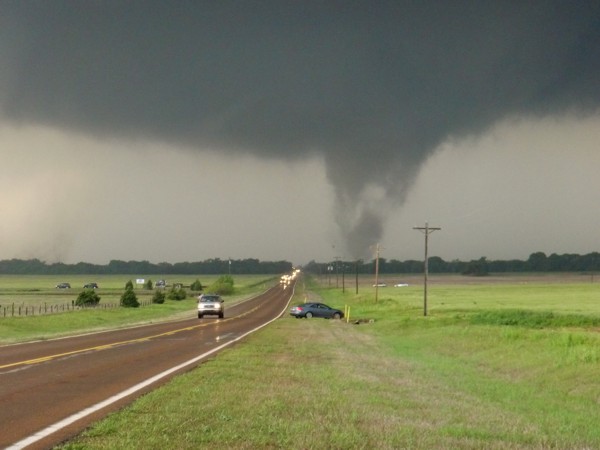 Tornado west of Wakita, OK. Taken by Jesse Duncan with other Stormgasm chasers. 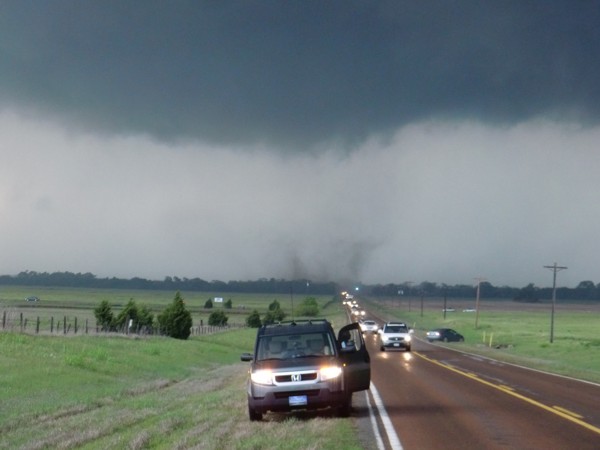 Tornado west of Wakita, OK, taken by Jesse Duncan with other Stormgasm chasers.

Today features the kind of setup that produces large, violent, long tracked tornadoes.  Unfortunately, storms will be moving east around 50-55 mph when they form.  Once they start producing tornadoes, they should ‘slow down’ to 45-50 mph.  That’s still very fast and will make chasing difficult.  Hopefully we’ll get on the right storm and see a major tornado, possibly even a historic one.

(Side note:  Video Camera Fail)
On another note, my video camera died yesterday afternoon during a test run (it wouldn’t turn on).  After about 20 minutes of trying everything to get it to work,  I was forced to go into Best Buy and be at the mercy of whatever they had left after their Mother’s Day sale.  Lucky or unlucky, the only camera they had in stock that records in HD and has manual focus capabilities was a refurbished Sony HDR XR500.  This is actually a pretty good camera.  The only thing I don’t like is it records on a hard drive.  But at this point, I’m just glad I have a high quality camera ready to record tornadoes today!

Storms are going to be racing east-northeast tomorrow around 50-55 mph, maybe even faster when they initially develop.  I imagine that once they begin producing tornadoes they will slow down to 40-50 mph.  This is going to make chasing very difficult.  However, the fast storm motion will increase the chances of very long tracked tornadoes occurring.  I really hope Vortex 2 can keep up so they can gather some amazing data for their research.  Maybe someday their research can help save lives on days like this.

The latest WRF model continues to eject the shortwave slower than the GFS.  I’m a little surprised to see this, seeing as how the European had been on board with the faster GFS idea.  Nevertheless, it’s very interesting to see the WRF keep the dryline further west across western and west-central Oklahoma in the afternoon/evening.  This will allow for supercells and the resultant tornadoes to track across a more chaser friendly terrain.

I do worry how quickly the low level moisture will return north.  The WRF hardly has mid 60s dewpoints to the I-40 corridor by 1 p.m. Monday.  Though by 7 p.m., the mid 60s line reaches Wichita Kansas.  So, it looks like a very rapid return of moisture could be in place in time for tornadic supercells to fire in the very late afternoon along the dryline.  This would result in potentially long track, violent tornadoes in the early evening across central/north central Oklahoma and southern Kansas on Monday.

We’ll see if the WRF remains consistent with the slower/further west solution.  But even if the GFS is correct, there will be tornadoes, some long track and violent, but moreso east of I-35 across Oklahoma and Kansas.

Putting Monday aside for a moment, Tuesday and Wednesday both have significant potential for tornadic supercells.  Both days will feature an approaching mid level trough and a strong, southerly 850 mb jet.  Deep, low level moisture will be in place from north Texas into Oklahoma, contributing to CAPE in the 2000 -4000 j/kg range.  Storms could fire off the dryline across western north Texas to western Oklahoma, or along the stalled front across central Oklahoma.

Basically, there are going to be more tornadoes on Tuesday/Wednesday from north/western north Texas into western to central Oklahoma.  This upcoming week (namely Monday – Wednesday) is turning out to be the prime time this month to go storm chasing.

I’ve be watching what the computer models have been showing for Monday, May 10 for the past several days.  Each time the day exhibits factors that are present on historic tornado outbreaks.

A strong shortwave will be ejecting eastward into Oklahoma/Kansas in the afternoon/early evening.  A surface low will deepen over southwestern Kansas and slowly track east, causing a dryline to mix east.  A 40-50 knot southerly 850mb jet will develop beneath a 60-80 knot 500mb jet out of the west-southwest.  This is the kind of shear that supports violent, long track tornadoes.

In a broad sense, the setup is likely to produce a few tornadic supercells, with at least one violent tornado.  But there are questions to be answered.  The first is how far north the deep, low level moisture will return.  The second is how early morning convection associated with the rapid moisture return will effect the day.  Namely, how quickly that convection will clear out and allow for good daytime heating.  Finally, models still don’t agree on how quickly the shortwave itself will eject eastward into Oklahoma/Kansas.  Thus, we can’t be too sure this early in the game how far east the dryline will mix.  So the target could be anywhere from western Oklahoma/Kansas stretching into the I-35 corridor to as far east as eastern Oklahoma/Kansas and western Missouri, depending on the timing of the shortwave.

We shall see.  Either way, I think there will be some violent, potentially long track tornadoes on Monday.

8 Responses to “Major Tornado Day Monday, May 10 for Oklahoma/Kansas”