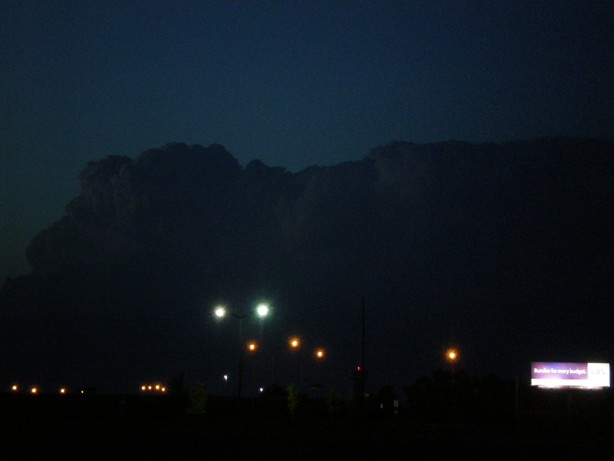 Today was a frustrating chase day.  We drove from Norman, OK to McPherson, KS and waited for the CAP to break along the warm front.  Eventually, towers began growing to our east around 5:30 p.m. and we ended up driving east to near Emporia.  Along the way we kept on stopping, looking at towers, checking data, etc.  As the evening progressed, it got to around 8 p.m., the sun was setting, and it was time to call it a bust.  So we headed toward Wichita to turn in for the evening at a hotel.  On the way there, as it became dark, a supercell finally fired to our north.  Above is a picture I shot from the hotel parking lot of the supercell to our north.  If only it had formed during the day……

Anyways, we watched a decent lightning display for a few minutes.  At least I made a good forecast, though I wish I could control the time of day when a storm will develop!  Now it’s time for two down days before heading to the Texas panhandle for the next chase on Sunday….

I’m sitting in Norman, OK trying to decide on a chase target for today.  I’ll most likely be heading north into Kansas and choosing a target based on new data as the day progresses.  But, a strong CAP will keep any convection that does fire during the day from firing until around 6 or 7 p.m.  If a storm can actually form in daylight hours, it could be a spectacular supercell in an environment that would support tornadoes.

Sunday could be big across the southern Texas panhandle/caprock if the CAP can be broken.  But, it certainly looks like a much better setup than today.

Monday looks HUGE.  IMO, it looks like a classic setup for numerous tornadoes, some violent and long tracked, across western/central Oklahoma and western/central Kansas.  Monday has the potential to be the best tornado day of  the year across the southern plains, based on what I am seeing this morning.  Then Tue/Wed both appear to hold chase opportunities along the stalling frontal boundary as more shortwaves continue to eject eastward from the southwestern U.S.

Needless to say, despite today’s marginal chase setup, there will be plenty of good chase setups in the days to come.

After having a few down days in middle TN, it’s time to drive back to Oklahoma and get ready to be in position for the chase setup on Thursday.

The latest WRF model shows the CAP breaking near the triple point across the central Kansas.  With very backed low level flow and veered mid level flow, this could be a prime area for tornadic supercells.  Dewpoints are forecast to be in the lower 60s by the early evening, supporting 1500 to 2000 j/kg of CAPE.  Ingredients certainly appear to be coming together for quite a show Thursday evening.  Hopefully, the upper level support is strong enough to actually break the CAP (like the model suggests) and allow for supercells to develop.  Should that be the cape, tornadoes appear likely.

Thursday (May 6) is looking even better in terms of strong wind shear across Oklahoma and Kansas.  According to the 12z WRF model, the low level wind shear would strongly support tornadoes.  The main issues with this setup will be the strong capping inversion that will keep storms from forming throughout much of the afternoon and early evening.  But, an upper level disturbance is forecast to eject eastward across the region in the evening.  Hopefully that will be enough to break the CAP and allow supercells to form off the dryline.  If nothing else, this setup has a lot of potential.

Next week (May 9 – 14) looks active in terms of good setups for tornadoes across the southern Plains.  The MJO is becoming re-established over the Indian Ocean as I type.  In a few days, convection will propagate into the Indonesia region and the response across the U.S. will be deep troughs digging into the southwestern U.S., ejecting into the Plains.  Sure enough, medium range models are in good agreement in developing a long wave trough next week over the Southwest, with shortwaves ejecting into the Plains Sunday through Friday.  The period from May 9 – May 14 may be one of the most active periods during the month for tornadoes across the Plains.

In the shorter term, the next chase opportunity looks to be Thursday across Oklahoma or Kansas.

3 Responses to “Looking Ahead”