Here we are just past the middle of April and the storm chasing season has been pretty slow. The exceptions have been a day or two of supercells from north Texas into Oklahoma, with a few tornado reports. But for the most part severe storm activity has been infrequent at best across much of the central U.S., including the Great Plains. In fact, over the past couple weeks snow has fallen from central Oklahoma to Kansas! And not only that, but Detroit, MI officially broke their season snowfall record. They recorded 94.9 inches of snow for the season, beating the old record of 93.6 inches set way back in 1880-81! So, winter has sorta hung on into mid April and the severe storm/chase season has been sitting in the back seat, waiting for its turn at the drivers seat. Well, things are starting to come together and the chase season may get in the drivers seat by the end of the month.

A couple weeks ago I addressed the beginning stages of a MJO wave over the Indian Ocean and the Indonesia region. At the time it appeared like two areas of tropical convection would come together and propagate east. It hasn’t been a classic wave and plenty of other things are going on across the northern hemisphere that are complicating matters. But, tropical convection has reached the international dateline/western Pacific, and things are being set into motion (see image below).

Outgoing longwave radiation over a 3 day period (April 15-17). Notice the negative values over the western Pacific indicating where tropical convection has reached the international dateline. 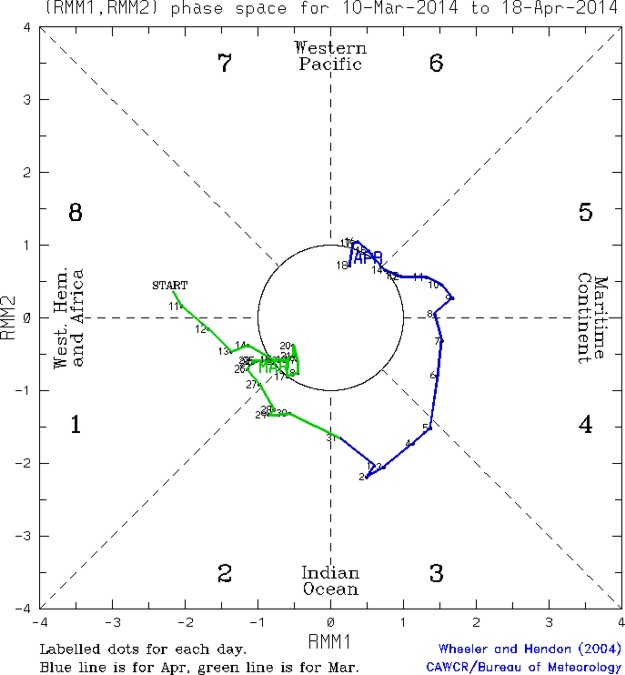 Notice the MJO had a weak projection into phase 6 but has since weakened further.

For those of us hoping for the severe storm activity to pick up across the Great Plains (and that’s many of us), then it’s unfortunate the tropical convective signal (MJO) is weakening. But the good news is some strong jet energy coming out of eastern Asia and the northern Pacific will work in conjunction with this MJO signal. What this means is something that’s already being set into motion. We will see a couple Pacific jet stream extensions, which we will see in the form of troughs slamming into the western U.S. The first of which will occur next week (Week of April 21) and should bring a day or two of severe storms across the Great Plains/central U.S. But the larger, more significant jet extension will occur a few days later in late April (you can already see that beginning stages of that jet extension over the western Pacific east of Japan right now, see image below). This is the jet extension that should bring a series of troughs (some significant) into the western states during the last week of April into early May. And if everything worked out perfectly, this would bring several days of storm chasing/severe storm setups to the Great Plains during that time. 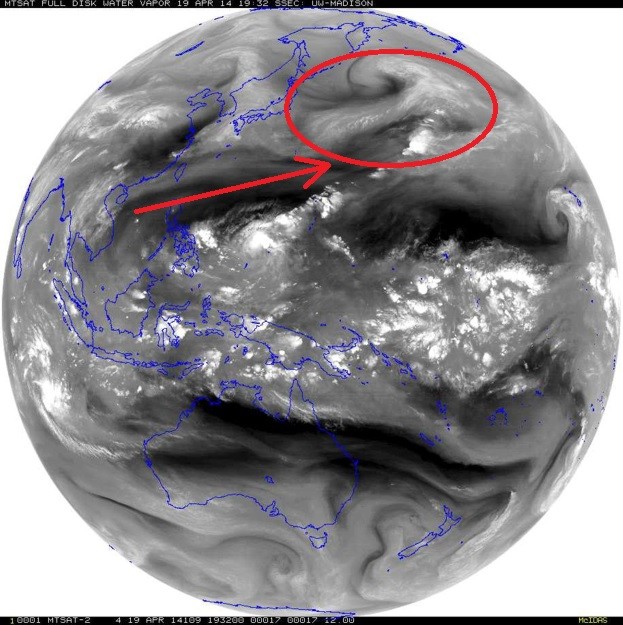 Water vapor image centered on the western Pacific valid 2032z April 19, 2014. The red arrow outlines the Pacific jet feeding into a low pressure system east of Japan (red circle). This combination should eject eastward across the Pacific in the form of a powerful Pacific jet extension. 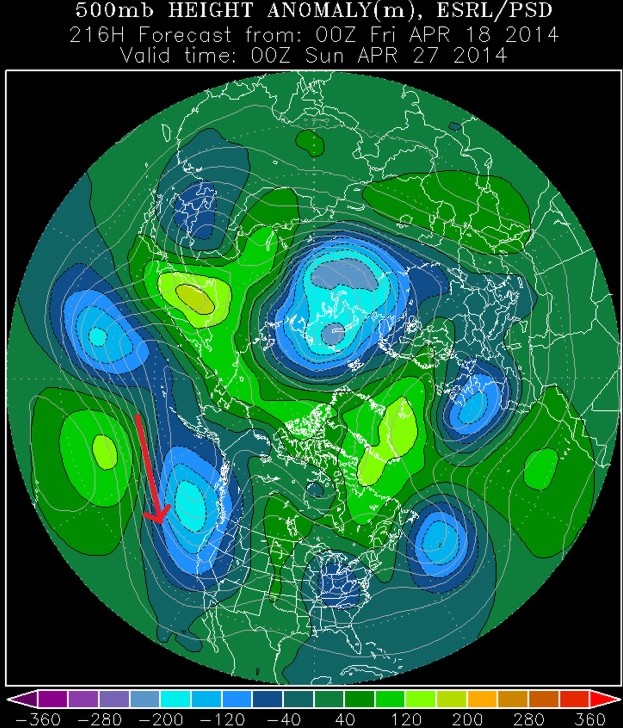 GEFS Reforecast (initialized 00z 4/18/2014) 500mb height anomalies valid April 26, 2014. Notice the deep trough over the eastern Pacific extending into the western U.S. The red arrow is there to outline the Pacific jet extension, essentially the same ‘piece of energy’ that is currently over the western Pacific near and east of Japan. It should be noted the European Ensemble (not shown) is much more aggressive with the jet and troughing.

The biggest question in my mind now is how effective these troughs (storm systems) can eject east into the Great Plains. The concern is the projection of lingering tropical convection west of the dateline in late April/early May could promote ridging across the Rockies/Plains (some computer models suggest this trend). This would keep much of the troughing over the western states and could limit the severe potential across the Great Plains. But at the very least I think individual shortwaves will eject into the plains and bring a severe pattern equal to what climatology would suggest for this time of year. After all, there’s no sense in being picky here. The pattern has been very quiet and any uptick in activity is a welcome change for storm chasers!

But as can be seen in the images above, the Pacific jet stream is poised to extend into the eastern Pacific by the end of the month. As seen by computer models (one example shown above), this jet extension should bring a deep trough into the western states, which should then either eject east or send a series of shortwaves into the Great Plains. As I already said, the MJO is weakening, so just how deep of a trough we can get to eject into the plains is in question.

Though it seems clear the severe storm/chasing activity will come to life during the final week of April, perhaps extending into early May. If we can get another jet extension following this one, then maybe the increased severe activity will extend into the first ten days of May. We’ll just have to remain hopeful and keep our fingers crossed!!