It’s been a real battle up until the past couple days to bring about spring storm chasing setups to the southern plains. But at least the brutal cold winter pattern finally gave way to spring in a meaningful way. There were severe storms including supercells, which did produce a few tornadoes from Texas to Missouri in recent days. But I do believe this is only a small taste of what mother nature has in store for parts of the Great Plains as we head into mid and late April.

For months, tropical convection near and west of the international dateline has been a dominant feature. This has been primarily responsible for a persistent ridge over western North America and Alaska, promoting cold, arctic air intrusions into the central and eastern U.S. And through most of March, this cut off the rich, low level moisture supply from the Gulf of Mexico and can be at least partially blamed for a very slow start to the spring severe weather season across the central U.S. (namely the Great Plains).

Over the past few weeks new tropical convection has emerged over the Indian Ocean, whereas the dateline convection stubbornly remains in place. Over the past several days it’s becoming more and more clear that the Indian Ocean convection is growing and may be emerging into a new MJO wave. You can see the two areas of convection in the images below. The first is a satellite image centered on Indonesia, while the other shows outgoing longwave radiation anomalies over a 3 day period (March 31-April 2). 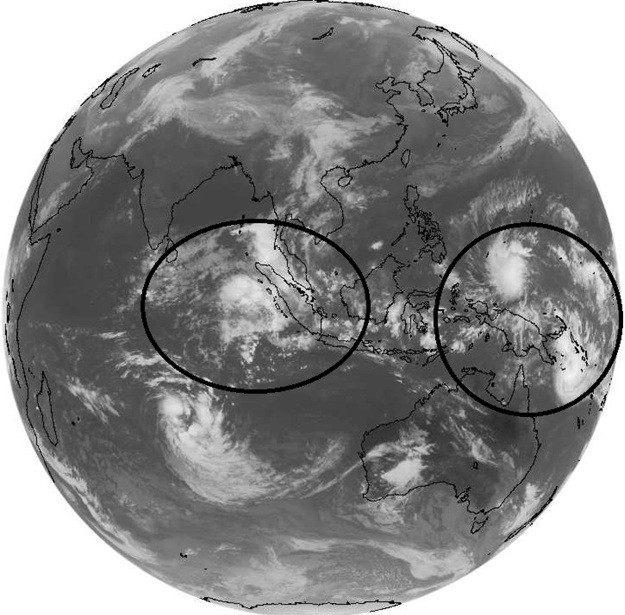 Infrared satellite image valid 02Z April 4, 2014. Notice the two areas of tropical convection. These may come together over the next few weeks as the main area over the eastern Indian Ocean moves east.

In a perfect world the MJO would make it out to the western Pacific in mid to late April. This in turn would drive deep troughs into the western states and yield severe storms/chase setups across the Great Plains. Although, given this is April and not May or even June, there would be intermittent western ridges developing between major western troughs (see computer model forecasts for next week, western ridging building ahead of Pacific troughs). That’s just a factor of the jet stream wavelengths still being short, a leftover from winter. Anyways, as the MJO moves further east and makes it out to the western Pacific, more significant troughs should crash into the western U.S. and we should also see more southeastern U.S./Gulf of Mexico ridging as well. Essentially, a pattern that would allow rich low level moisture to lift north into strong westerly winds aloft, promoting severe storms across the southern plains. 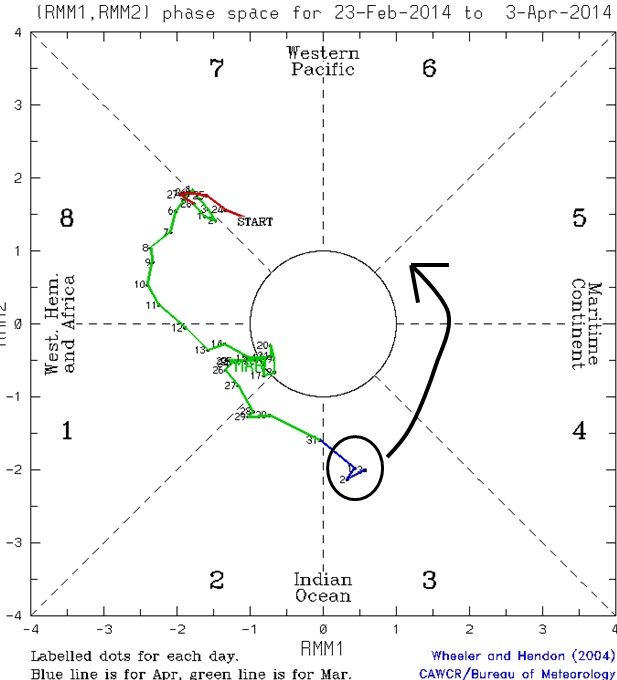 MJO plot as of April 3, 2014. Notice the latest plot is over the eastern Indian Ocean, indicating that area of convection may become the most dominant. I drew in the black arrow myself, showing how this new MJO wave should move east, eventually towards the western Pacific later in April.

BUT, this is a not a perfect world and the dateline convection IS a messy issue. What will probably happen is the dateline convection will bring a convective response in the form of intermittent ridging across the northwestern U.S. into western Canada, perhaps even into Alaska. But the Pacific jet stream will increasingly cut underneath this ‘block’ and crash into the southwestern U.S. We will also continue to see a subtropical jet stream as warm sea surface temperatures in the western tropical Pacific will support that.

I think this is all very positive news for storm chasers..at least it is for me. The storm chasing season has been slow as we were frozen by the never ending winter. Predictions of El Nino have brought a lot of doubt to the future of the chase season going into May and June. And while this post has nothing to do with that, I’m simply pointing out a sub-seasonal weather event that may bring some decent severe storm events to the Great Plains in mid and late April (perhaps into early May?). Whether or not El Nino develops is a topic for another blog post (if I ever get around to that!). I will say this: If El Nino does indeed begin developing in earnest by May, that is not a good sign for the remainder of the chase season.