The first active severe weather period for April has come and gone. This period, which was Sunday through Thursday of this week (April 14-18), had been poking it’s head above water well in advance. So it seemed likely more than a week in advance that a series of potential severe weather events would unfold across the Great Plains and central U.S. But of course the details were in question, and it’s those details that often times dictate whether or not a severe weather setup will be capable of producing numerous tornadoes.

During the first three setups (Sunday through Tuesday), a strong CAP located near the 850mb pressure level was likely the main reason for the limited to no supercell thunderstorm formation. When supercells did form, they struggled with the CAP. This wasn’t too surprising with the lack of good large scale forcing to cool the mid level temperatures sufficiently. In other words, lift from strong jet stream winds associated with main storm system out west hadn’t quite made it out the plains just yet.

What is interesting is the events from both Wednesday and Thursday both had very similar issues. Wednesday was advertised as a potentially significant severe weather day across Oklahoma and surrounding areas. Supercells indeed fired and sustained themselves all afternoon into the evening across southwestern Oklahoma. But at first glance one should have been scratching their head at the lack of more significant tornado reports from those supercells given the high levels of low level wind shear coupled with ample instability. But once you investigate the mid level temperatures, you see what the problem actually was. 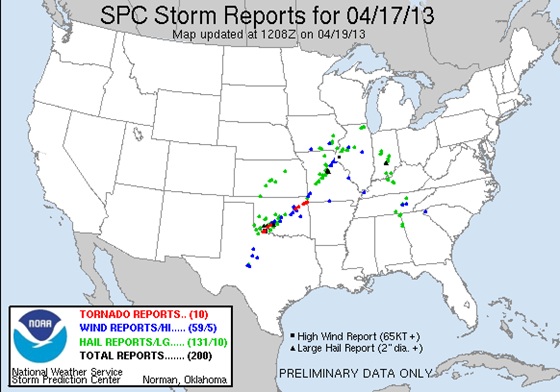 Below are two soundings from 00z April 18 (7pm local time). The first is from Dallas, Texas. Notice the inversion (warm layer) located around the 675mb level. A CAP located that high in the mid levels causes thunderstorm updrafts to struggle. The 850mb inversion has been eroded, but it’s that warm layer located much higher up that really causes issues with not only thunderstorm updrafts, but consequently the tornado potential with the thunderstorm. You can also see an inversion from the Norman, Oklahoma sounding (despite the sounding data stopping around 675mb) below. This inversion is likely a contributing factor in the lack of more long track tornadoes produced on Wednesday across southwest Oklahoma. 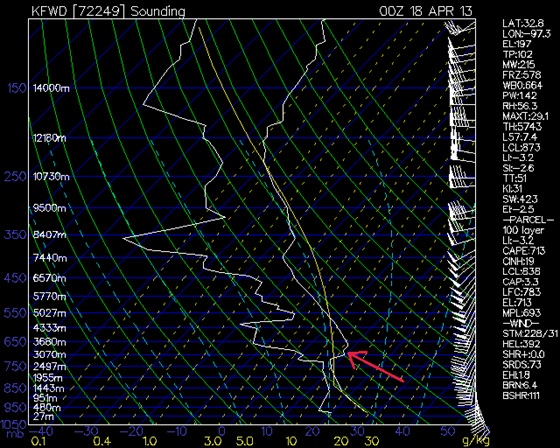 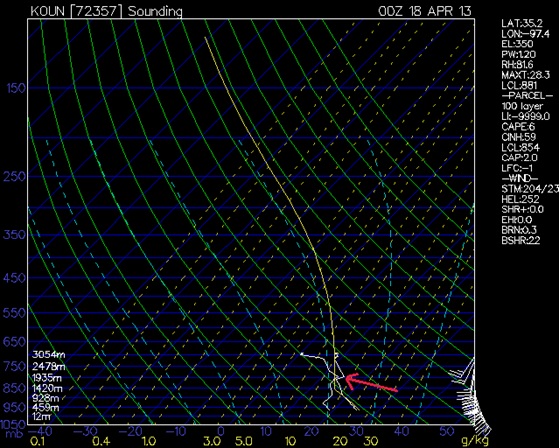 Going one step further, this same storm system moved into the Midwest and Tennessee valley areas on Thursday. Wind shear and instability were present along with adequate moisture. But one problem was a squall line that never dissipated and continued moving east across Missouri, Illinois and Indiana (see image below). Cloud cover ahead of that squall line was another issue, limiting quality surface heating. But those weren’t even the biggest issues. Discrete storms (including supercells) might have had a chance at forming out ahead of that line of thunderstorms had their not been another high level CAP! 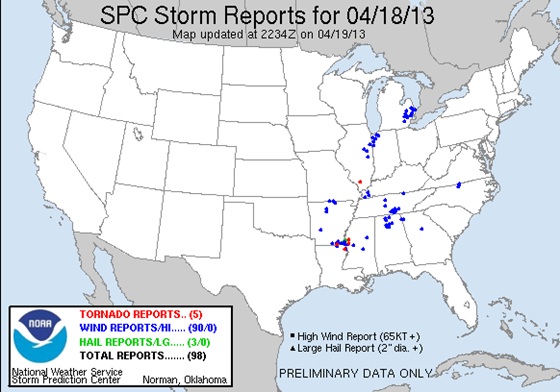 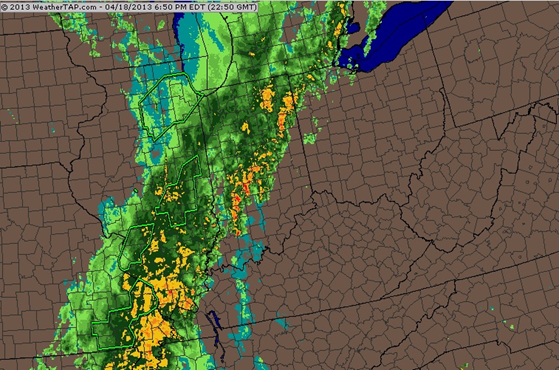 Regional radar image from 6:50pm EDT on April 18 over the Midwest/Ohio Valley region.

Below is the 00z April 19 (7pm Thursday) sounding from Nashville, Tennessee. Notice the CAP located at 675mb, the same level the inversion was located on the Dallas sounding from the previous day. Also look at the Indianapolis sounding from Thursday morning. While not as pronounced you can still see an inversion near the 675mb layer. 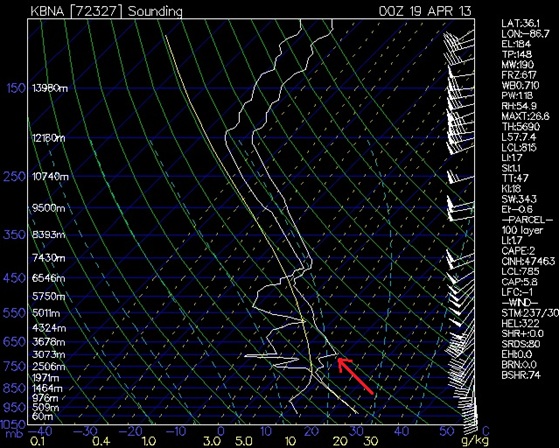 Nashville sounding at 7pm on April 18. Notice the inversion at the 675mb layer, the same level where the inversion was located on the Dallas Fort Worth sounding from the previous day. 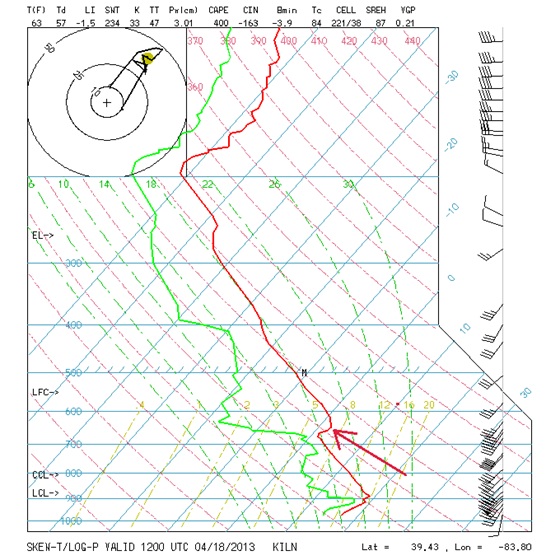 Indianapolis, Indiana sounding from 7am on April 18. Notice the inversion located at 675mb.

So what is going on here? I mean, a big storm system moved into the central U.S. during the week. For three days in advance of that system there were severe weather setups that were ultimately destroyed by the CAP. That’s not too unusual, especially early in the season when sometimes low level moisture and especially cloud cover can be a major inhibiting factor. But for both days — when the main storm system was involved — to be completely underperformed due to continued capping inversion issues? This is not good. Either this pattern was trashed from the beginning, or something smells bad as head deeper into the storm chasing season.

IMO the pattern that evolved coming out of the cold March we had was the issue. So over the next couple weeks or so the weather pattern just needs some time to adjust. The atmospheric ‘hangover’ from historic high latitude blocking needs time to disappear, and spring just needs time to be refreshed. We need a do-over. The other issue that hasn’t gone away is the current drought over the plains states. I believe that was probably a contributing factor to the significant CAP we’ve seen as of late. I’m not sure that issue is necessarily going to be resolved without a fight.

Alas we wait ’till May with our fingers crossed…