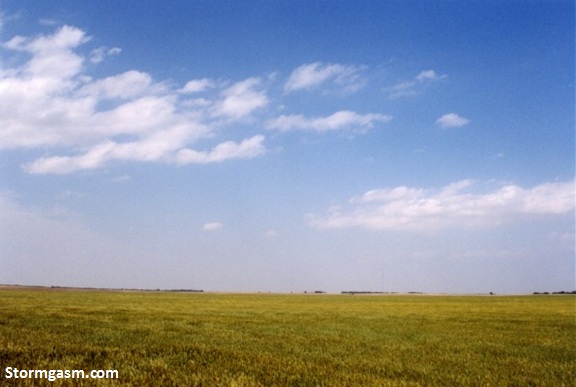 Photo from May 22, 2002 near Dodge City, Kansas. The CAP was just too strong on this day, leaving partly cloudy skies above an open field in western Kansas.

The CAP, or capping inversion, is a term storm chasers have given over the years to a very warm layer of air located above the surface in the lower to middle levels of the atmosphere. It holds off thunderstorms from forming until some lift from the dryline, a cold front or some other forcing can break through and maintain sustained convection. In other words, once the CAP breaks, supercells can form and the chase is on. If the CAP doesn’t break, well, better luck next time.

I imagine that for tomorrow’s setup (Monday, April 8 ) the CAP will be mentioned quite a bit, but not in a positive sense! The CAP is a double edged sword. You need it to keep storms discrete to have a higher probability of producing tornadoes. At the same time if it’s too strong, then there’s the chance no storm form at all. And trust me, driving out to the middle of Kansas or Oklahoma or wherever to look at towering cumulus clouds all day that amount to nothing isn’t exactly what I consider a fun day.

Tomorrow looks like one of those days where the CAP may just be too strong in a lot of areas despite quality low level moisture and very good wind shear for tornadoes ahead of the dryline. Of course if a storm can form along the dryline and sustain itself, then it certainly has tornado potential. Though it seems more likely any storm that does form would struggle with the CAP and have a hard time producing a tornado. But you never know, forcing along the dryline can sometimes surprise us, so there’s always a chance.

But there will be large scale forcing focused over eastern Colorado and northwestern Kansas, so that would be an area where storm will be much more likely to form. Plus there will be some help from upslope flow as well, so that’s a plus. Wind shear there will also be favorable for supercells and tornadoes. Though moisture could become a concern, limiting instability. I’m personally not a huge fan of the storm motions projected for that area either. But, it’s definitely an area where storms are much more likely to form and probably holds the highest odds for supercells and potentially tornadoes to occur.

3 Responses to “The CAP”