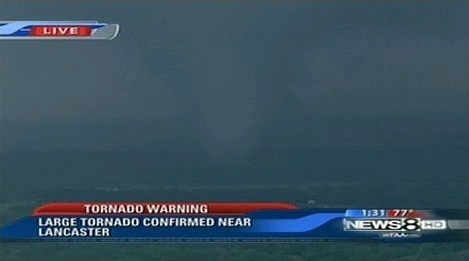 Two damaging tornadoes moved through the Dallas/Fort Worth area today. For several minutes both tornadoes were on the ground at the same time. Given the proximity the Dallas/Lancaster storm was to a TV station’s tower cam, I had the unique opportunity to view this tornado live for several minutes on my computer.

The image above is a screen capture of the tornado from the live feed. 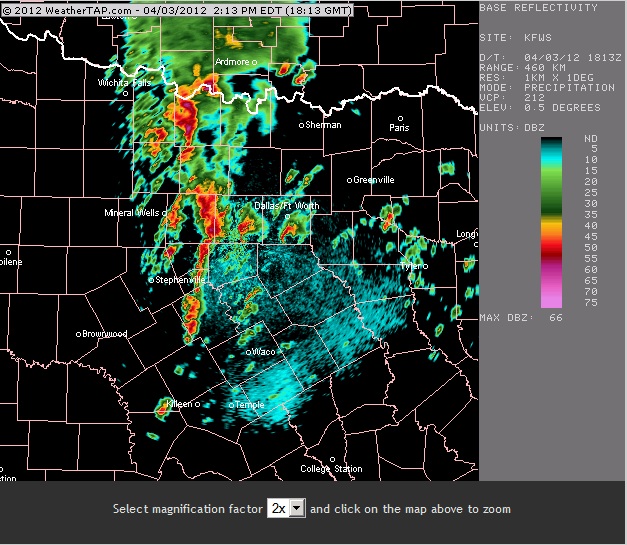 Radar image of the DFW area while both tornadoes were on the ground.

While I viewed the live feed of the destructive tornado that moved through the south and east side of Dallas, another supercell was producing a large tornado on the south and east side of Fort Worth, moving through the Arlington area. No live feed was available, but the news did pan to a quick, previously recorded shot of that tornado, which appeared from a distance to be a large cone tornado. You can see the two well defined supercells in the Dallas and Fort Worth areas on the radar image above. These cells developed ahead of a line of thunderstorms. 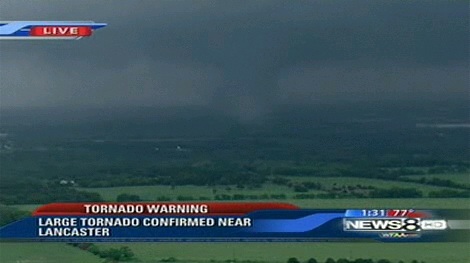 The image above gives you a good view of the tornado from a distance. Again, seeing a tornado live on TV or through a live feed as it moves through a major metropolitan area is unreal. I watched the feed as the tornado moved through the southeast side of Dallas and ripped up trailers, structures and semi-trucks that were parked at a truck stop. Large pieces of debris were being thrown into the air. 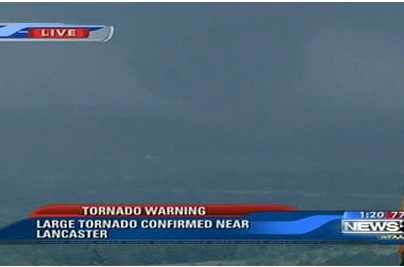 As I come to the end of this write-up, tornado warned supercells continue to move through the Dallas Fort Worth area. I’m afraid that quite extensive damage may be waiting for assessment once the day is over.

Days like today remind me that we are living in a new era of storm chasing/viewing/spotting. The era of live feeds. This has been around for a few years now, and today isn’t even the best example since the feed was from a TV tower cam! However, more and more storm chasers are taking advantage of broadband cell phone internet access on the road and providing live tornado feeds.

Today just reminds me that the old days of storm chasing are dead and gone…and the new era of live photo and video updates on Facebook, Twitter, and storm chaser websites is the new standard. I guess I bring up this topic because things were so much different twelve years ago when I was first getting started in storm chasing. I’m part of the previous generation of storm chasers that had to rely on computer internet access at public libraries, nowcasters via cell phone, my eyes and instinct to find tornadoes. Well, now I can view radar images at will while chasing at nearly any time I wish, and access to data is simply amazing while chasing. I guess days like today just make you stop and think…