There is no easy way around it. It has been a long, cold, rough winter for most of us across the U.S. Or, at least it has been for storm chasers looking for early spring chasing activity. And while the cold winter pattern doesn’t want to give up across the northern parts of the country, mother nature has had enough over portions of the southern Great Plains. We’re finally seeing Gulf moisture returning north into Texas, warmer temperatures, and a general sense that spring is in the air.

The jet stream is also switching gears. For months the polar jet has been in a blocking position, allowing brutally cold arctic air to continue sliding south from Canada into the U.S. It has also blocked Pacific storm systems from making headway into the western U.S. and plains states, which are typically key to help trigger severe storms. But finally, the Pacific weather pattern is changing its tune. The Polar jet stream is shifting and the subtropical jet is coming to life. At last we have the beginning stages of severe weather setups across the southern Great Plains in the coming days and weeks. 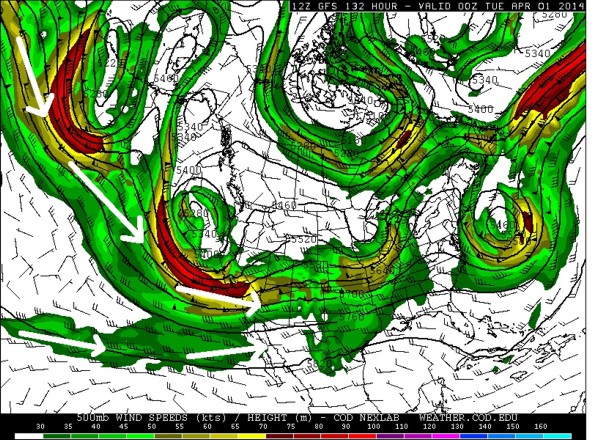 But wait, I wish it were that simple and easy, but it’s not! While this new pattern (mix between the polar jet and subtropical jet, see graphic above) will undoubtedly bring storm systems into the southern plains over the coming weeks, low level moisture may indeed be a huge issue. The problem is arctic air sitting over eastern Canada isn’t quite ready to retreat north, and that’s because the base state of the atmosphere continues to favor cold air intrusions over eastern parts of the U.S. This may be enough to limit the supply of quality low level moisture into parts of the Great Plains. At best there will be room in-between cold fronts for moisture return northward and severe storm setups over the southern plains. At worst, however, cold air intrusions will cut-off the Gulf moisture supply and storm systems across the plains will have poor moisture to work with for severe storm setups. This will lead to marginal setups.

The good news is there will at least be storm chasing opportunities heading into late March and the first week or two of April given the jet stream flow. But it will take some work from the atmosphere to get all the right ingredients together for severe storms and tornadoes — more than normal for this time of year.

But seriously I’ll take it. It’s been cold and it’s been snowing for far too long. It’s time for something different, something new..it’s time for storm chasing season to begin. And even though this is a slow start, we have to start somewhere, right?

Until next time…and seriously sooner rather than later!