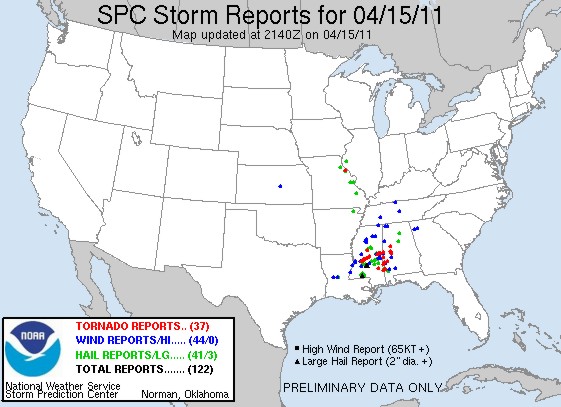 So far today, there have been 36 tornado reports across central/southern Mississippi and Alabama. Both regions are largely unchaseable IMO, with the exception of parts of western Mississippi. There, the terrain is flat due to the flat plain surrounding the Mississippi River.

Anyways, on a day like today when destructive tornadoes are ripping through Jackson, MS and Tuscaloosa, AL, you wouldn’t really expect to see much tornado footage from storm chasers. But today through Facebook I was able to instantly view spectacular video of the tornado moving through Jackson, MS.

It’s just amazing to me, as someone who began chasing during a time when a chaser had to rely upon a nowcaster and internet at public libraries to get radar and satellite data during a chase, to see a group of storm chasers get amazing video of a violent tornado and have it online within minutes! The sad part is I don’t even know who actually shot the video! But that’s beside the point.

It seems to me that a large portion of the chasing community has grown into a new generation that is all about instant gratification. New chasers seem to work pretty hard to get their video online as quickly as possible. This is saturating the tornado video market as a lot of times these chasers unknowingly are either giving their video away, or are selling it for much less than it’s actually worth. For the record, the video from Jackson that I already viewed for free on Facebook and Youtube would be worth a lot of money.

At the risk of sounding like a crotchety old man, I find this evolution in storm chasing to be quite unsettling. A lot of new chasers and soon-to-be-chasers probably think you can just drive out to the plains and get right up next to a massive tornado with little effort. And why wouldn’t they think that? Amazing videos like the one I saw today are accessible instantly online while storms are ongoing, and sometimes the video is available live. This is only because there are literally several hundreds of chasers out during every severe setup nowadays. So from probabilities alone, somebody WILL get video of the tornado, leaving dozens or even hundreds of chasers with nothing to show from their day. Things have certainly changed since I began chasing over a decade ago. Ok, I’m done ranting.

My thoughts go out to the people in Jackson, MS.