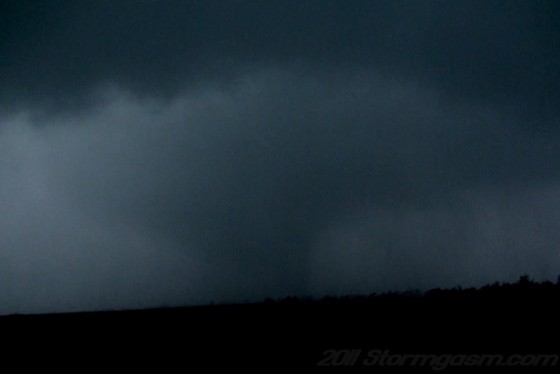 The past few days were completely exhausting, but worth all the pain since I got to witness my first tornado of the year with two old friends. The irony about the whole trip is I purchased the plane ticket to get me out there because I felt the cold core tornado setup looked great (and it did at the time). But the models were wrong, and by Tuesday morning, when Simon and I were looking at the new data to decide on our chase target, it had become quite clear that the warm sector was probably going to be our only hope of seeing a tornado. So not only was the original cold core setup essentially non existent by this time, but the setup across the overall Red River/Texas region did not look that good. It didn’t appear that the odds were in my favor that day for me to see a tornado, despite how things looked just 36 hours earlier.

Anyways, we only managed a couple hours of sleep Monday night. Adrenaline and the fact that we needed to be up early to see the new data and decide how far we needed to drive kept us from getting any actual restful sleep. Shortly after Tom arrived, we headed South on I-35 with hope, but that’s about it. We ended up following storms east and south that afternoon across south central/southeast Oklahoma. But none of the storms were impressive, with short lived mesocyclones producing weak, mostly non-rotating wall clouds (see image below). Finally, we noticed a new storm in north central Texas that was separated moreso from all the other convection in the area. 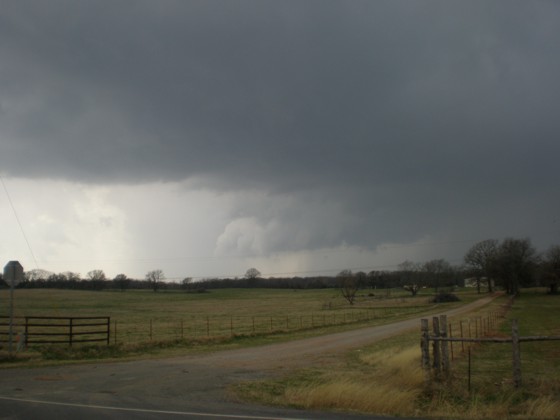 So we spent the next 1.5 hours navigating through small roads through southern Oklahoma, across the Red River, and into Texas to try intercepting that storm, which we were currently to the northwest of at the time. For that entire time we had no cell phone signal, so we had no data. But we knew we needed to continue on a general east direction as quickly as possible to have any chance of catching up to the storm, or whatever new storm may have developed, since we were behind the storm to the northwest. At this time the three of us (me, Simon, Tom) were depressed. We’d been in situations like this many times before, and it usually ends with not only no tornado, but no actual good supercell either. But we kept going because we knew the environment the storm we hoped was still alive would be moving into was conducive for tornadoes. Hope kept us moving east.

As we approached Paris, TX we were finally getting close to the mesocyclone and core of the storm, which now had a tornado warning! But there was a traffic jam, and thus the storm was once again getting away from us. Luckily there was a state highway heading north shortly after we approached the traffic jam, so we took that, marking the beginning of a very stressful, difficult and fast pace race to navigate through the north and east side of Paris in an attempt to finally catch up to the storm. In this process we were only a few miles to the northwest of the mesocyclone. So the winds were roaring from the northeast at a very high speed, with blinding, wind driven horizontal rain pounding the car. I remember looking out the window to the south and seeing all the trees bending to the southwest, and it actually looked like everything was being sucked, like there was a vacuum off in the distance or something. The power of this storm was becoming quite obvious. You could even see the base of the clouds racing from left to right. The motions in the clouds were just amazing to see, as inflow just streamed into the center of the storm like something big was either about to happen, or was happening and the rain was blocking our view.

We finally made it out of the core of the storm’s blinding rain and hail, and pulled over to the side of the road by an open field. This wasn’t a location we could stay in for too long though, because we were only a couple miles east of the core, and just a few miles to the north of the mesocyclone. But within a couple minutes, just as the rain started to come down again, an amazing clear slot developed to our southwest, but whatever wall cloud or rotation that was occurring was wrapped in rain and invisible. Then suddenly, several small lowerings in the cloud base became visible, and a tornado quickly developed. The tornado was first multi-vortex and then filled into a large wedge shape that had to have been at least 1/4 mile wide. It was moving rapidly to the east (right to left) and was partially rain wrapped the entire time, making it difficult to see. At one point one of the vorticies took on a stovepipe appearance, and then the entire tornado become wrapped in rain and invisible.

Striations above the gust front along the rear flank downdraft of the tornado-producing supercell 3/8 5:05 p.m. 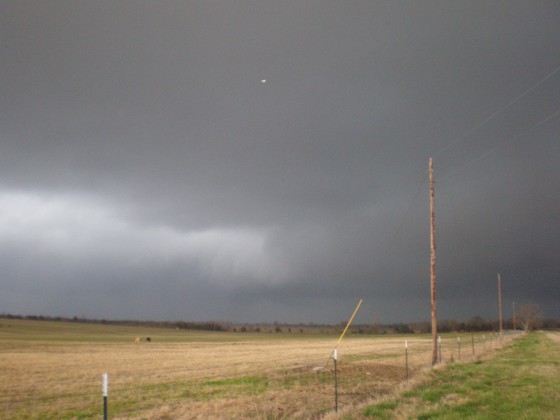 Large clear slot visible on the left, with a rain wrapped wall cloud. This picture was taken one minute before the tornado became visible. 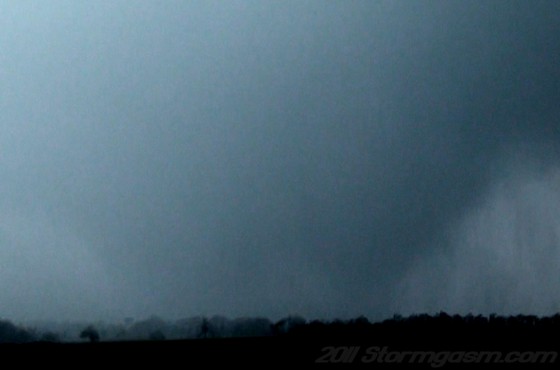 Being just north of the tornado and now seconds away from being slammed by the core (blinding hail and high winds), we then began driving quickly to the east again, and were soon greeted with blinding rains again as the wet rear flank downdraft punched through from the south. As we drove to the east, we were very careful because we could no longer see the tornado to our south, but never actually saw the tornado dissipate. Suddenly, we were out of the rain again. I looked to the side of the road to the south (right) and noticed a white rotating cloud almost directly above us moving quickly to the north, straight at us. Even though it didn’t looked like a funnel, it was rotating and you could see the rear flank downdraft feeding into the rotation. We quickly drove faster to avoid being hit by this possible tornado. After we were safely in front of it only seconds later I looked behind us and saw the white funnel moving due north on the right (north) side of the road.

Now that it’s been a few days and we’ve talked to other chasers about the events that occurred, I learned that was indeed our tornado. It was in the rope-out stage and the RFD was occluding it to the north. Apparently vehicles behind us that did not speed up to avoid the funnel were hit and damaged. I did not see that and sure hope nobody was hurt. For us though, talk about a close call! We were literally seconds away from being hit by a tornado. But years of chasing experience and instinct allowed us to make a fast decision, bringing us to a safe location before it was too late. We chased the storm into southwest Arkansas but never saw it produce another tornado.

We didn’t get back to Norman until midnight. That isn’t really all that late, but I had a plane to catch back to Connecticut that was scheduled to leave at 6 a.m. So we had three hours to eat, pack, load video onto our computers and provide some type of website and blog update before leaving for the Wichita airport. Needless to say I made my flight, but I got there as they were boarding the plane! I really don’t like cutting it that close, but at least I didn’t miss the flight.

For what it’s worth my connecting flight into Chicago didn’t give me any time either. After exiting the plane into the O’hare airport, I spent quite a long time getting to my gate. I only had enough time to quickly use the restroom and purchase breakfast burritos from McDonald’s before the flight started boarding. Now remember I’d only slept a couple hours Monday night, and had been awake ever since. So the stomach acids inside me were angry, and greasy fast food wasn’t the best choice. But it was that or nothing.

I finally made it home to Connecticut that afternoon. But I had an important dinner scheduled that evening, and had to run a couple very necessary errands too, before going to dinner. In the end I was up for around 40 hours straight after only getting a couple hours of sleep Monday night! But all the money spent, the fast-paced stressful travel, pain, sleep deprivation, stomach upsetting fast food and aggravation was all worth it to experience an amazing supercell thunderstorm and my first tornado of 2011!