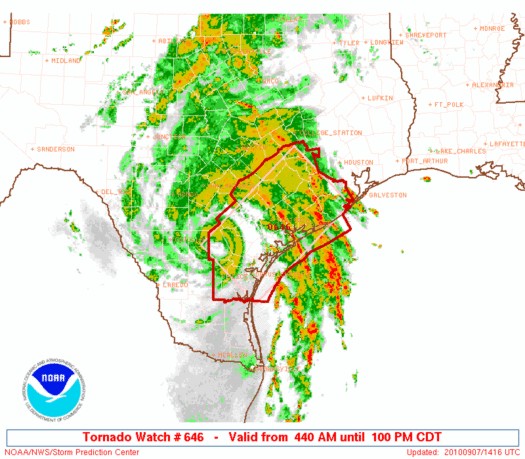 Tropical Storm Hermine made landfall across portions of northern Mexico and south Texas late Monday night. Hermine remained a tropical storm Tuesday morning as the eye moved north-northwest across the Rio Grande Valley and portions of southern Texas. Heavy rains have prompted food watches and warnings across parts of southern and southeast Texas.

Tropical Storm Hermine has also prompted a tornado watch over parts of south and southeast Texas. It is common for landfalling tropical systems to bring the threat of tornadoes, especially on the east side of the tropical storm. The tornadoes form from thunderstorms that develop and intensify within the outer feeder bands of the tropical storm. Wind shear necessary in the lower levels to produce tornadoes is already present from the landfalling tropical storm. The ingredient that is usually missing is adequate instability (CAPE) to support strong, long lived cells that can become organized enough to produce tornadoes. Most of the time though, there is just enough instability to support one or two weak tornadoes.

In the right kind of setup, landfalling tropical storms or hurricanes can bring significant tornado outbreaks. This happens when a pronounced dry slot moves into the east or northeast quadrant of the tropical system. This allows breaks in the clouds to form between the feeder bands, allowing substantial instability to develop. When this occurs, supercell thunderstorms develop. Since the low to mid level wind shear is so strong due to the tropical system itself, many long lived tornadoes occur in these types of setups. A great example occurred September 15 – 17, 2004 when Hurricane Ivan made landfall near Mobile Bay, Alabama. As Ivan tracked northeast and weakened across the Southeastern U.S. and Mid Atlantic states, his feeder bands spawned 127 tornadoes across Florida, Georgia, the Carolinas, Virgina, Maryland and Pennsylvania. Several of these tornadoes caused fatalities.

Today’s setup across south and southeast Texas doesn’t look quite that formidable. There is an abundance of moisture on the east and northeast quadrants of Hermine, with no sign of a dry slot. The feeder bands will have limited instability to work with. So, I don’t expect more than two or three tornadoes across Texas today. If a handful end up verifying, they are likely to be weak, short lived tornadoes.