On Sunday, August 22 at 5 p.m. EDT Tropical Depression Four become Tropical Storm Danielle. Then by Monday at 5 p.m. Danielle become a hurricane, with maximum sustained winds of 75 mph. Danielle then moved over very warm waters and rapid intensification occurred. By 5 a.m. EDT on Tuesday, August 24 maximum sustained winds had increased to 100 mph, making Danielle a strong category 2 hurricane. However, dry air surrounded the outer bands of the hurricane, and it was only a matter of time before significant weakening would occur. Then, at 11 a.m. EDT, maximum sustained winds dropped to 80 mph. All the deep convection was almost completely gone, and an exposed center of circulation could be seen beneath a dense overcast. Danielle had ingested a lot of dry air, causing her to weaken.

The graphic above is the latest forecast from the National Hurricane Center. They no longer expect Danielle to become a major hurricane, which isn’t really that surprising. Quoting their discussion, “The period of rapid intensification has ended with a thud”. I’m not trying to be critical here, but it sounds like they were caught off guard.

From the water vapor image below, you can see an abundance of dry air covering a large portion of the central Atlantic to the west of Hurricane Danielle. It was only a matter of time before this dry air would start to cause weakening. Wind shear also remains an issue, and it seems very unlikely Danielle will become a major hurricane after all.

Danielle did undergo a period of rapid intensification, which was very pretty impressive. I believe this was possible mostly because of the very warm waters she moved over last night (see image below). But in addition, the wind shear relaxed just enough, and the upper level outflow was strong enough for a few hours to keep the dry air away from the center of circulation and allow the strengthening to occur. 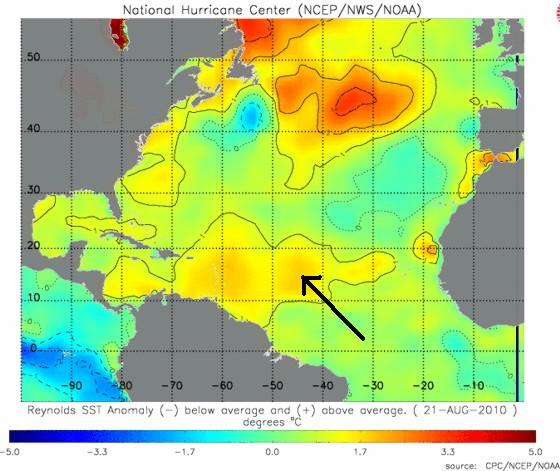 But this season started slow for a reason, and the driving forces behind that haven’t really changed. Dry air across parts of the Atlantic remain an issue, along with areas of moderate to strong wind shear. It’s really going to take some big changes across the board to catch this season up to the very active season it is suppose to be, at least from Colorado State and NOAA’s forecasts.

The peak of the season is coming in a couple weeks, so surely things will pick up. I will say that there are signs the MJO may enhance the tropics starting some time next week. But since that idea didn’t work out last time, I’m naturally a little skeptical about that idea working out this time. We’ll see…