Tropical Storm Danielle trying to form over the eastern Atlantic… 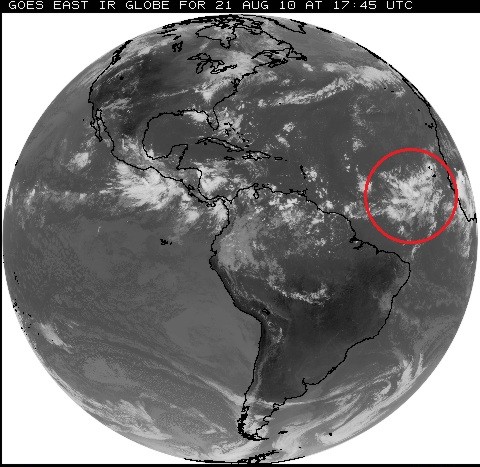 It’s been a while since the Atlantic tropics have shown any life. For the past several days, all global computer models have consistently indicated that a tropical wave would move off Africa into the far eastern Atlantic, and form into a tropical storm. Finally, this tropical wave has generated an are of low pressure at the surface. Showers and thunderstorms have been increasing, and have even begun to show signs of a circulation. This has lead the National Hurricane Center to give this system a high probability of becoming a tropical cyclone within the next 48 hours. Should this tropical disturbance become a tropical storm, it would be Tropical Storm Danielle, the fourth named storm of the 2010 Atlantic Hurricane Season.

Below is some of the model guidance, showing the track of this system. As you can see, models indicate the future Danielle will track west-northwest across the central Atlantic over the next few days. By around Wednesday, August 25, models show this system turning northwest to northward and out to sea. This is in response to a trough moving through the northeastern U.S. over the next several days. It will create a weakness in the eastern Atlantic ridge, which is currently driving this tropical system westward. When this weakness occurs, the future Danielle will be forced northward and out to sea. Other global models show a similar track, so it appears highly likely this tropical system will have no impact on the U.S., and only be a concern for ships. 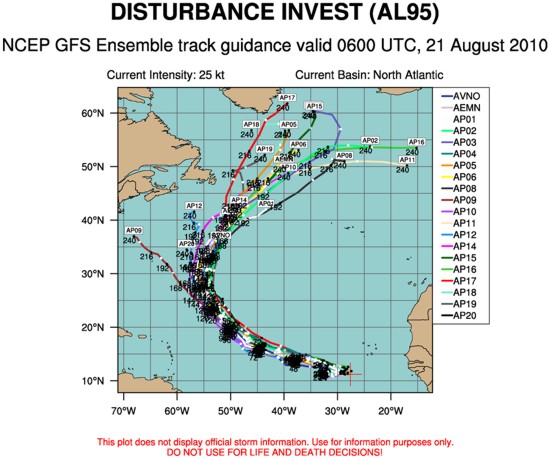 It’s quite telling that I’m talking about a tropical system that hasn’t formed yet, and one that isn’t going to impact the U.S. It tells me and everyone else reading this something about this season — it’s not performing to the high expectations set by both the Colorado State forecasters and NOAA. Some of the reasons why haven’t changed. There remains an abundance of dry air across the Atlantic, and wind shear remains an issue. For this disturbance over the eastern Atlantic, these factors are going to make it an uphill battle to achieve beyond weak hurricane status. Even so, this will give us our fourth named storm of the season, keeping things on par with a normal season. At this rate, the hurricane forecasts issued recently calling for 18 named storms this season are in big trouble. But, maybe things will pick up in an incredible way in early September as we approach the peak of the hurricane season. If it doesn’t, people will begin to lose respect for long range seasonal hurricane forecasts, putting the science of meteorology one step behind in the general public’s mind.

Speaking of people losing respect for meteorologists, check out Dr. Hansimian’s Hurricane Forecast (the monkey). He’s forecasting 6-8 hurricanes this season. At this point, his prediction is looking better than others!