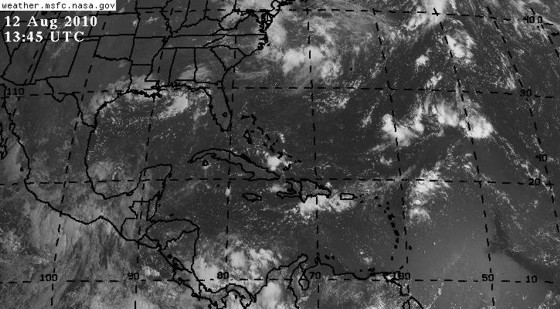 Visible satellite image over the Atlantic basin on August 12

It’s mid August and the tropics are quiet. If you look at a satellite image, you might think its May or June instead of nearly the middle of the hurricane season, since it’s hard to find even an area of thunderstorms anywhere across the Gulf, Caribbean or Atlantic Ocean. Based on NOAA’s 2010 Atlantic Hurricane Season Forecast, and Colorado State University’s Forecast, this should be a very active season. Even looking a climatology, we are heading into the more active part of the hurricane season. About a week ago, I event talked about how I thought the tropics would become much more active by now and into next week. Yet, the tropics are silent. So what gives?

Well, from what I was seeing last week around this time, the MJO was moving west into the Atlantic Ocean. This was bringing enhanced, large scale, rising motion into parts of the Atlantic, and helping potential tropical waves to develop. That trend was supposed to continue, but it didn’t, as seen quite clearly from today’s satellite image of the Atlantic Ocean.

So now we are left with no help from the MJO. Depending on how much more the MJO moves east and strengthens, it could further impede tropical action in the Atlantic for the next week or so. Add to the list an abundance of dry air and upper level disturbances all over the Atlantic basin and you are left with the sound of crickets.

But, according to Dr. Philip Klotzbach (the Colorado State Hurricane Forecaster), “it is too early to think that this is a seasonal forecast bust”. He is forecasting 18 named storms and 10 hurricanes this season.

So, we’ll have to wait and see what happens. The true peak of the hurricane season begins August 20 and goes through around mid October. That leaves a lot of time to play catch-up. But, Klotzbach’s forecast calling for 18 named storms and 10 hurricanes is going to be really tough to reach, considering we stand at 1 hurricane and two tropical storms so far this season. Although, water temperatures remain very warm, so anything’s possible.

But the way things look now, it could be late August or even early September before things really pick up again. That isn’t to say there won’t be a random storm in the open Atlantic before then. But, the big ramp-up in tropical storm and hurricane activity I expected by now just isn’t panning out. We’ll see though, something always changes with the weather, and Klotzbach sure seems optimistic.