Nine weeks into a hurricane season that is expected to be very active has so far been on par with a normal season. But, it is still relatively early in the season, with plenty of time for the tables to turn.

But, I think the tides will be turning over the next several days to two weeks, with more sustained tropical storms and even hurricanes across the Atlantic. The first reason is because climatology (image below) tells us that tropical storm and hurricane activity dramatically increases as we head into mid August. But the more significant reason is due to the Madden Julian Oscillation (MJO) moving back into a phase which favors the development of tropical storms and hurricanes across the Atlantic Ocean. 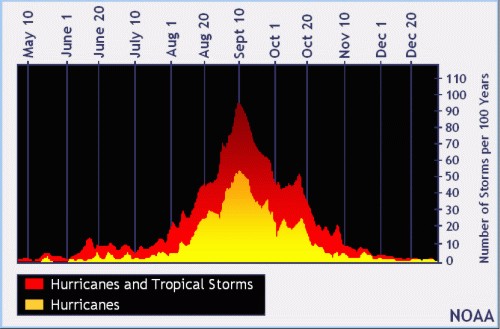 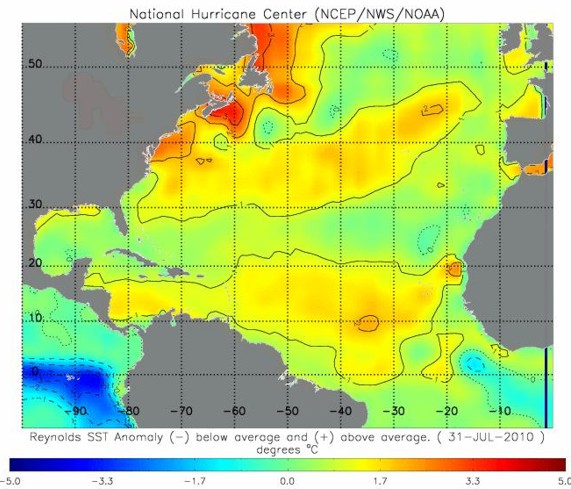 For about the past week or so, the Atlantic Ocean has actually been under a phase of the MJO which causes large scale sinking motion, making any tropical disturbance fight an uphill battle to develop into a tropical storm, let alone a hurricane. Then, factor in the wind shear and dry air issues, and no disturbances really stood a chance of becoming anything significant.

But now, the rising motion associated with the MJO has moved into the eastern Atlantic, and this should continue to spread westward into the Caribbean over the next week or two. This should really give the hurricane season a huge boost, especially compared to the way it’s been lately. If I’m right about this, then by this time next week we’ll be talking about a tropical storm or even a hurricane somewhere in the Atlantic basin that stands a shot of becoming something significant. At the very least, we’ll be talking about something developing that stands a decent shot of becoming significant. The only concerns would be how much wind shear persists, and how much African dust continues to drift into the Atlantic.

So, we’ll see what really happens over the next week. Either way, the season should pick up soon.