8 inches in diameter is the new size record for U.S. hail… 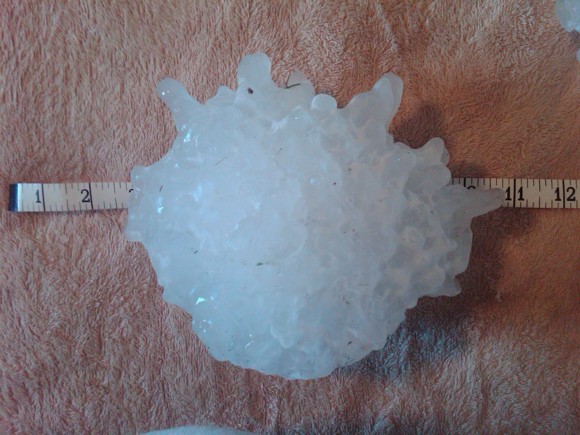 Photo courtesy of the NWS office in Aberdeen, SD

I know this isn’t exactly news anymore, but I thought it would be fun to talk about. As most of you are aware by now, or maybe you’re not, there was a new record set for the largest hailstone in the U.S. on July 23 in Vivian, South Dakota. The hailstone measures 8 inches in diameter, and weighs almost 2 pounds! This breaks the previous hail record set back in June of 2003 in Aurora, NE with a diameter of 7 inches. Either way you slice it, that’s really big hail.

I can’t imagine what would happen if that hail hit you on the top of your head! But get this, the guy who found the hail said it was even bigger when he first found it. However, it melted a bit in his freezer due to his area losing power for about an hour. So, we don’t actually know how big the stone was before the official NWS measurement took place.

Personally, I would love to see hail that large, as long as I’m in a car or inside a building. The biggest hail I’ve seen on a chase has to be the softball sized hail on May 29, 2004 in Oklahoma. Unfortunately, we don’t have pictures of the hail, just pictures of the incredible supercell and small tornado we saw. We were more focused on getting the tornado than documenting the hail that day.

But the biggest hail I have pictures of would have to be from April 17 of 2002 when we found near baseball sized stones on the side of the road. The other would be May 27, 2002 in Crossbyton, TX when we saw a bunch more golfball to baseball sized hail. In fact that day most chasers lost their windshields due to the hail, or they at least suffered significant cracks. But for some reason we (Stormgasm chasers) lucked out and all the big stones missed our windshield. It’s funny though, when you chase as often as we do, your luck eventually runs out. Over the years we’ve busted more windshields from big hail than I’d like to share. But boy, hail can be sure be fun to experience first hand. 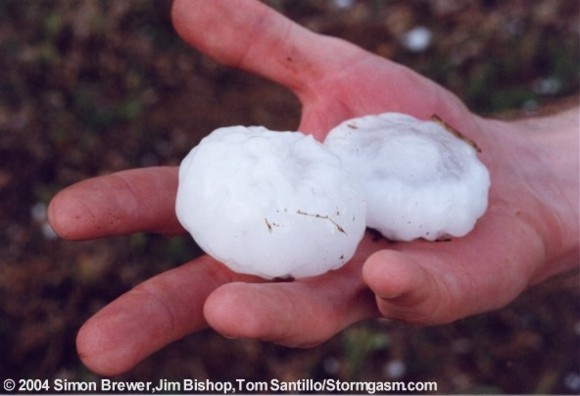 Hail from April 17, 2002 in northwestern Oklahoma caught by Stormgasm 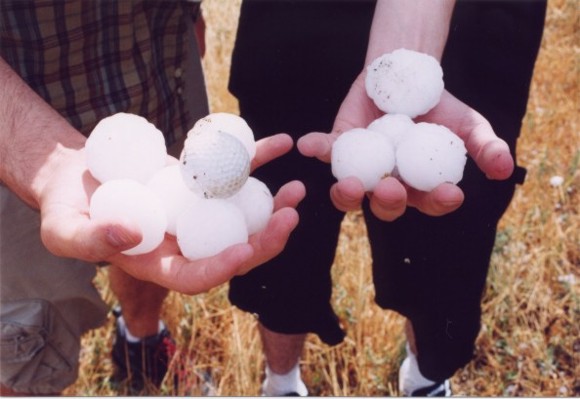 Hail from May 27, 2002 in the Texas Panhandle by Stormgasm chasers