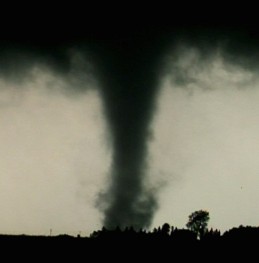 By this time of the year, it’s common for people to forget about tornadoes and tornado safety. It is true that the season has already peaked, but it’s always important to remember that tornadoes can occur at any time of the year. Plus, we are still in the season when tornadoes are not uncommon. Since we are about to say goodbye to July and welcome the month of August, I thought I’d come up with a list of the most significant August tornadoes for both the U.S. and Canada.

I feel it is my professional responsibility as a meteorologist to educate the public about tornadoes whenever I have the opportunity. Dozens upon dozens of people die every year from tornadoes, but those numbers should be much lower. With the advancement of radar technology and computer models, combined with the expertise and experience of trained meteorologists, annual tornado fatalities have been reduced from the 100s to the dozens over the last 50 years due to advanced tornado warnings. But the problem today isn’t about the warnings, it’s about the human response. If people don’t act, the warning serves no purpose. I can’t force anyone to head to the basement or bathroom when a tornado warning is issued. That’s the responsibility of each individual. The only thing I can do is spread the knowledge and expertise I’ve learned as a meteorologist, and as a storm chaser, over the last ten years. The rest is up to you when you hear the warning.

Just one more thing to clear the air before you read about the August tornadoes from the past. I would like to state the definitions of a tornado watch and a tornado warning. Many people still don’t understand the difference between the two, and why would they? Most people don’t receive proper severe weather education in schools earlier in life. And most TV weatherman don not focus on educating the public on this sort of thing, at least in the more populated areas. So hear you go. Thanks for reading, and feel free to ask me a question if you have one.

Tornado Watch: Conditions are favorable for the development of tornadoes in and close to the watch area.

Tornado Warning: A tornado has been sighted or indicated by Doppler radar. Take shelter immediately.

There are two types of tornado warnings:

Significant August Tornadoes in the U.S. and Canada

This tornado swept right through the heart of Louisville, Kentucky, destroying a church during Sunday services. According to local papers, twenty five people inside the church were killed, including many woman and children. The tornado moved on to the center of town, demolishing many local business and other structures.