7 tornadoes were reported in Minnesota on Saturday.  But once again, nothing to indicate a large or strong tornado occurred… 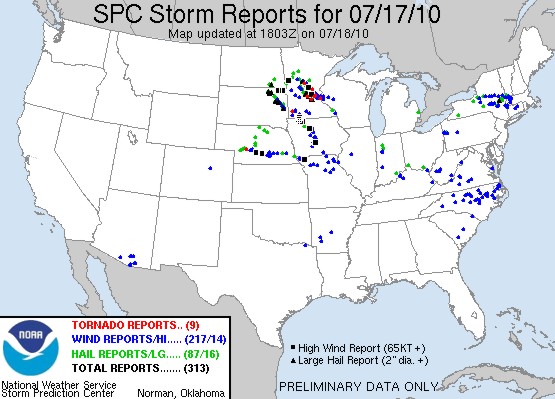 Storm Reports from the SPC for Saturday, July 17

I’m experiencing some dejavu, is anyone else?  Yesterday was a great tornadic supercell setup, yet there were only 7 confirmed tornadoes.  And from reading the actual text reports from the SPC page, it sounds like none of the tornadoes were large, and none of them lasted for more than a couple minutes.  To me this is very surprising, especially considering the wind shear and instability that was present for this event.  Think back to Wednesday (July 14), the most recent Minnesota tornado setup.  In total number of tornadoes, it eclipses yesterday’s event, despite having a seemingly weaker low and mid level shear environment.  But both events failed to produce a good, long track or large tornado across Minnesota.  Once again, damaging straight line winds were main event, so to speak. 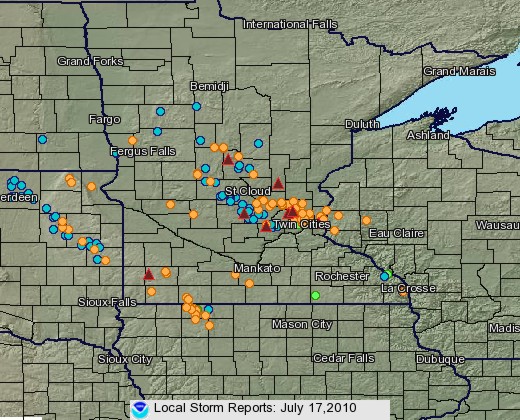 Reports from NWS in Minneapolis for Saturday, July 17

One supercell did manage to ride the boundary in central Minnesota for a while.  But the storm was later undercut by the boundary, and that may be the reason why that particular supercell did not produce more large or even long track tornadoes.  What’s strange is the storm looked very impressive early on, with an intense core and a hook echo (see the first radar image below).  Although, the first tornado wasn’t even reported until over an hour later.  Even more interesting is the first tornado was reported after the storm crossed the boundary. 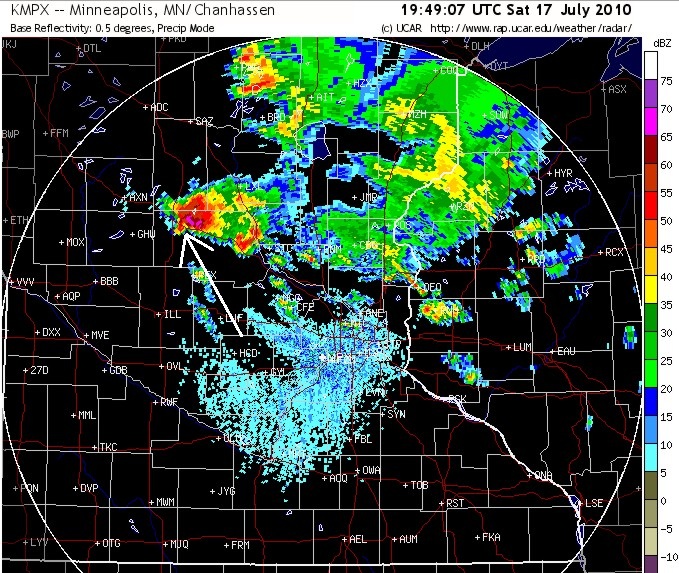 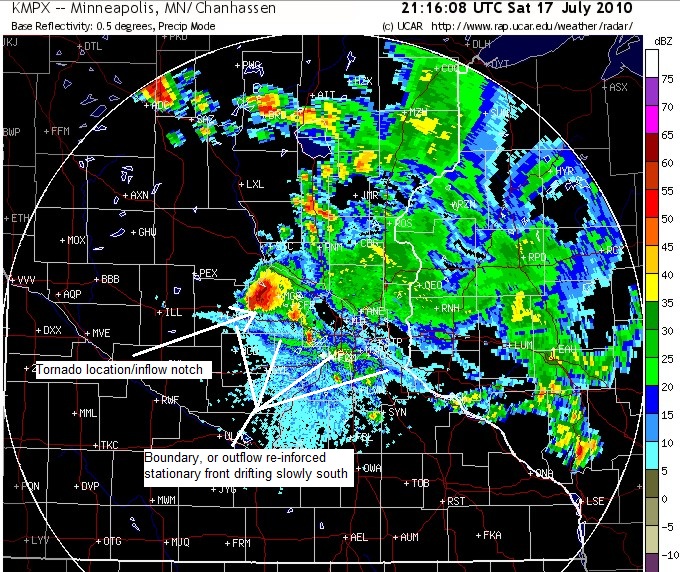 As you can see in the radar image above, the supercell is now on the north side of the boundary, or fine line shown on the radar.  What has happened is the outlfow from all the other showers and thunderstorms well north and east of the stationary front have brought rain cooled air to the surface.  This has re-enforced the stationary front, causing it to drift southward.  As a result, the tornadic supercell is now on the north side of the boundary, and likely in a much more stable environment.  This is when the storm produced its first tornado!  The storm continue southeastward, remaining north of the boundary, producing relatively weak, short lived tornadoes.  The fact that it remained north of the boundary is one good reason why the storm didn’t produce any notable, large or long track tornadoes thereafter.

But the question remains why the storm didn’t produce any tornadoes before it crossed the boundary!  This why Vortex 2 was out chasing these things all spring.  Maybe one day we’ll have the answer….

I’m a little behind in following today’s setup (for various reasons), but here is what’s happening and what is about to happen.  Yet another supercell/tornado setup is unfolding as I type across central Minnesota, only this time the potential for tornadoes (IMO) is greater than what we saw a few days ago in the same area.

Once again, an intense upper trough is moving eastward over the top of a heat ridge centered over the southern U.S.  The combination of strong wind shear, deep low level moisture and extreme instability will bring the potential for severe storms and supercells across Minnesota this afternoon into tonight.  These storms will be cable of producing tornadoes, some strong, in addition to large hail and damaging winds.  Because of this severe threat, the SPC has issued a moderate risk across portions of Minnesota and northern Iowa. 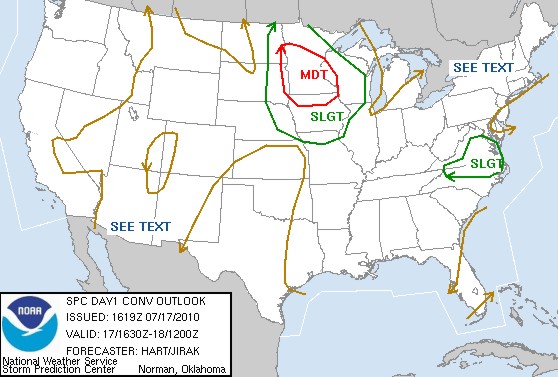 In the graphic below, you can see the SPC has issued a 10% risk for tornadoes across central Minnesota.  However, they have a 45% hatched area for damaging straight line winds.  The tornado risk per their forecast is lower than what we saw a few days ago.  But like the previous setup, they believe damaging winds are the main threat.

For today’s setup, however, the 0-3km and 0-6km shear looks more impressive.  For instance, the 850mb winds by 00z are forecast to be southwest at 35-45 knots.  Meanwhile, the 500mb winds are indicated by the RUC/WRF to be westerly or west-northwesterly near 50-55 knots by 00z.  Finally, surface flow is generally southerly on the south side of the front.  Basically, you have significant speed and directional shear in the 0-3km layer, as well as the 3-6 km layer.  This is an excellent breeding ground for tornadic supercells! 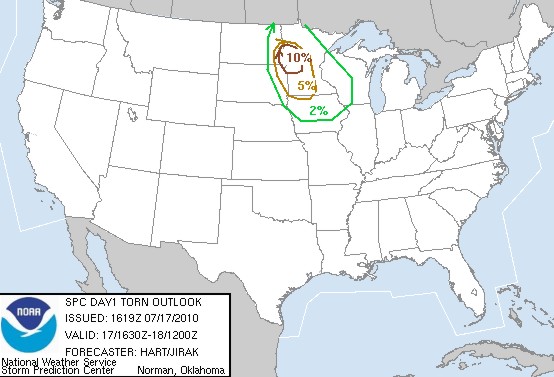 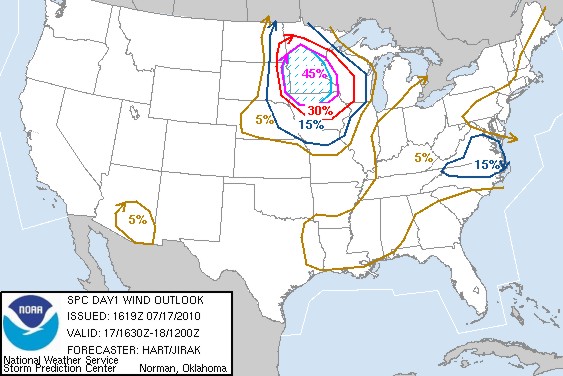 Finally, surface winds are backed along the stationary front over central Minnesota.  This front will serve as one of the primary focus points for thunderstorm initiation this afternoon and this evening, as the upper trough moves into the area.  Also, the front is draped northwest to southeast.  This orientation may allow supercells to move parallel to it, increasing the tornado potential this evening.  Finally, CAPE values are expected to be quite high, ranging from 3000 – 4000 j/kg or greater.  All of these ingredients (IMO) indicate a 15% hatched area for tornadoes is reasonable across central Minnesota, along the front.

Good luck to any chasers up in Minnesota today.  This could very well end up being a big tornado day, and I will be surprised if I don’t see some good tornado footage from this event online in the coming days.